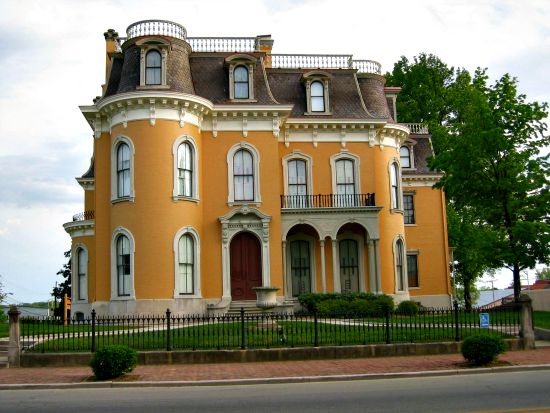 Culbertson mansion was built in 1867 by William Cumbertson, who was the richest man in Indiana at the time. This 26 room mansion took just 2 years to build at a cost of $120,000 which was a huge amount at the time.


After he died in 1899 his wife auctioned the house off to John McDonald which went for the surprising low price of just $7000, and upon his death his daughter sold it to the American legion.


Today it is quite well known for being haunted, and this has been going on since 1985 when the house started to advertise itself as a haunted attraction.


It is open for daily tours and has restored itself to how it was in 1867, apart from some necessary modern features like electricity. It is also listed on the national register of historic places and is now part of the Indiana state museum.

Even though the mansion has only been known as being haunted to the public since 1985, there are some stories that go back to the late 1800's.


During the carriage house behind the mansion was used as a servants quarters, and in 1888 it was struck by lightning, which is said to have killed all those inside. After that the servants are reportedly to have often refused to go anywhere near it, claiming it to be haunted by those who died in the fire.


In 1933 the Webb family moved into the house, and the children often complained about a shadowy figure who would open their doors at night and stand there staring at them for a while.


Obviously non of these stories can be confirmed and remain as just stories, but this may be a good explanation for at least part of the hauntings if its true.


As for the paranormal activity within the mansion it is often subtle things, such as footsteps coming from empty hallways and strange temperature drops.


But by far the most horrific story about the house is when the Webb family owned it. Dr Webb had his practice within the home, and patients came in and out all day. But not long after his practice opened people around the town started to notice others going missing, and they were all patients of Dr Webb.


The story goes that one day some of his family noticed strange smells coming from the basement and went to investigate when Dr Webb was out one day. They found a make shift torture chamber where it seems experiments were conducted on the people brought down here, with some of the bodies still being in the room.


Dr Webb came back and discovered that his family had found out his secret, so that evening he went from room to room killing his wife and children, reportedly through some kind of torturous means.


After this the house was boarded up for about 30 years before the American legion restored it, and this is thought to be the main source of the mansions ghosts, though of course this is just a popular story and would be very difficult to prove, but if its true.....