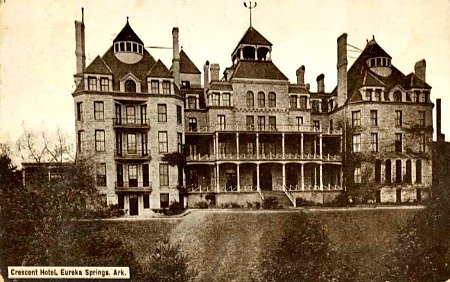 The Crescent hotel was originally built in 1886 as resort the people who were either rich or famous enough to stay there. Soon after opening it had problems with maintenance and debt and the business closed down and the building stood abandoned for several years.

In 1908 the building reopened as the Crescent college and conservatory for young women. This organization also had a lot of problems with the building and closed down after 16 years.

The building went through a number of owners and functions after this, including a junior college which only lasted for 4 years and a summer house which also came into many problems with the building.

In 1939 a Norman G Baker bought the building and tried to turn it into a spa and hospital. This was a problem however as Norman didn't have any kind of medical training what so ever. He practiced illegal and claimed to have found a number of miracle cures, one of which was to simply drink the local spring water which was his secret for curing cancer. After just 3 years he was charged with a number of medical malpractices and the building was yet again left abandoned.


Is the Crescent hotel haunted?

The hotel is one of the most famous haunted hotels in America and has often been known to be at number 1. Claiming the title of Americas most haunted hotel is no easy task. There would need to be a lot of strong and frequent activity seen here and also a reliable number of independent witnesses. Fortunately for the hotel is seems to fill all these qualities and then some.

The exact number of ghosts who linger in the hotel is unknown, though various ghost hunting groups and researchers have most commonly decided on 8 which are listed below.

The first ghost is also the first person who died at the hotel. His name is Michael and he was an Irish stonemason who died during the construction of the hotel. He was working on the roof when lost his footing and fell through it into the room which is now 218, hitting his head on a stone lintel and died instantly. His apparition has been seen standing in the room staring at the floor and also a loud thud has been heard coming from the room when its empty, as if someone had just fallen over. This is though to be one of the most actively haunted rooms in the hotel.

Room 419 is home to a ghost named Theodora who was a visitor to the building when it was hospital owned by Norman Baker. She was suffering from cancer and came here for treatment. Norman was nothing more then a scam artist and since his cure for cancer was nothing more than drinking spring water it obviously didn't work and she passed away. Her apparition, both full and transparent has been seen in this room by many people.

The ghost of an unknown young women who lived at the building in the 20's when it was a college. She killed herself by jumping from the roof and is though to be responsible for apparitions and waking up guests by touching them as they sleep.

A smartly dressed man in a hat and tails, believed to be the ghost of Dr. John Freemont Ellis, a frequent visitor to the resort during its glory days in the late 1800s.

An unknown man with a long beard and a top hat, wearing Victorian clothing has been spotted as an apparition across the hotel.

The ghost of Norman Baker himself is thought to reside here. Being responsible for a number of thing such as moving objects and loud marching footsteps.

Both of these ghosts are former nurses of the building. Whether they died in the hospital or not is unknown as Baker was very sketchy with his records, but for whatever reason they have chosen to linger here. They have been seen a number of times, mostly in the corridors as see through apparitions sometimes marching along with a clipboard or even pushing empty wheelchairs.

The Crescent hotel holds frequent ghost tours and is an impressive building to look around anyway, highly recommended if you want a good scare.

Crescent hotel - Back to top