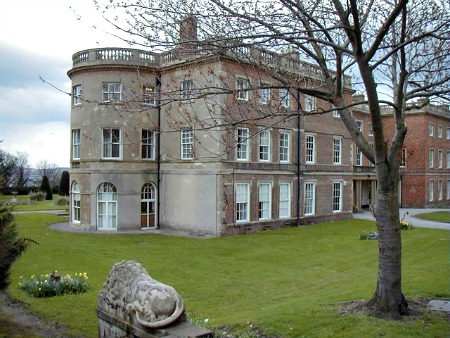 There was originally a manor building where Clifton hall now stands dating back to the 11th century. Standing on top of a cliff edge over looking the river Trent, the hall is an impressive piece of architecture owned for the majority of its life by the Clifton family, who lived there between the 13th century to the mid-20th century.

The Cliftons left the estate in 1958, ending a period of 700 years of family ownership. After the family left the hall became a girls grammar school, then Nottingham university used it, then it went into private ownership and became luxury apartments.

The most recent information on the hall is in 2008 its owner moved out and just stopped paying the mortgage, forcing the bank to reposses it. It was on the market in 2008 for £2.75m but if it now in private hands again is unknown.

The last owner was a private resident who one night just packed up and left, claiming the reason he couldn't live there anymore is because the place is haunted. Him and his family managed to stay in the property after only 8 months.

Stories of the place being haunted go back to at least the 1950's, but the origin of the haunting is unknown. A quote from the last family to live there goes as follows:

"The day we moved in we had our first experience. We sat down in the evening to relax and there was a knock on the wall. We heard this, 'Hello, is anyone there'? We ignored it the first time but two minutes later we heard the man's voice again. I got up to have a look but the doors were locked and the windows were closed."

The family claimed to have experienced frequent events through out the house, including the mother coming down stairs at 5am to see her daughter watching TV, only to go back up-stairs to find her asleep in bed. The family eventually decided to leave when they found drops of blood on the baby's blanket. After that find the family packed up and left that day, not willing to stay another night and never to return. The family's friends had also refused to come round due to the hauntings.

Many people have made claims of experiencing something odd here, from dark shadowy apparitions the size of children, to muffled conversations coming from empty rooms. Orbs can be found though out on photos and tapping an banging sounds on the other side of wall's or door are also common place.

Unfortunately with the house being repossessed and the price of the place, it may be unlikely that it will be open for ghost tours any time soon. Please check before visiting the site as it is private property.

Clifton Hall - Back to top