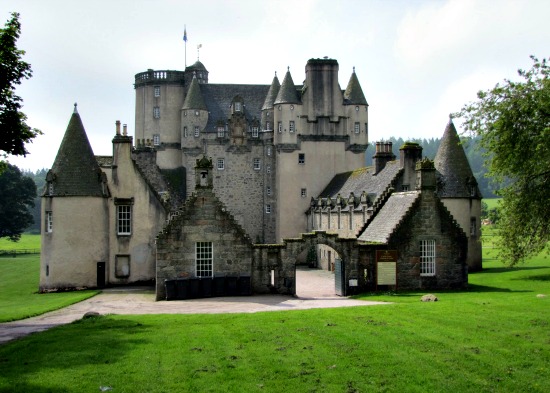 Castle Fraser is easily the most elaborate z-plan castle in all of Scotland. Built by the 6th Laird of Fraser, Michael Fraser, who started construction plans in 1575 and finally completing them by 1636. The castle stands on an earlier structure which is though to be that of defensive tower, built sometime during the 13th century.

The castle has had various owners during its life who made frequent adjustments to the castle, the most notable of which was the reconstruction of the interiors between 1820 and 1850 under orders of Charles Fraser. He hired two of the countries finest architects of the day who were John Smith and William Burn, who have each put their own personal touch's on various parts, including the library and the Gothic style designs around the castle.

External works during this period included the construction of the twin gatehouses and a grand domed stair and access corridors with loggias in the courtyard, though the later has now been removed.

The castle has belonged to the National trust of Scotland since 1976 and is now open as a tourist attraction. If you wish to visit please check with the venue directly to check any seasonal opening times.

The most famous ghost of the castle is that of a princess who was murdered as she was staying here. The story goes that she came to the castle as a guest and one night as she slept in the upstairs Green room someone came in and murdered her.

The reasons for doing so are unknown, but her attacker dragged her body down the stairs as part of his attempt to hide the crime. He was of course discovered and executed, and the princess laid to rest. But the odd thing about the crime scene is that the blood stains on the stairs could not be removed, no matter how many attempts were made to do so.

Since the stains could not be removed they were covered by the wooden paneling which can be seen today. As for the princess she still lingers within the castle walls, with there being many claims over the years of a ghostly mist like figure floating silently through the hallways.

The kitchen is also thought to be particularly haunted, with staff often hearing the sounds of childrens laughter or muffled singing coming from empty parts of the kitchen area.

Other paranormal activity here includes disembodied voices and whispers as well as ghostly piano music heard in the empty hall. A ghost in a long black gown has been seen a number of times in the castle grounds, thought to be the spirit of Lady Blanche Drummond who died at the castle in 1874.

Castle Fraser - Back to top