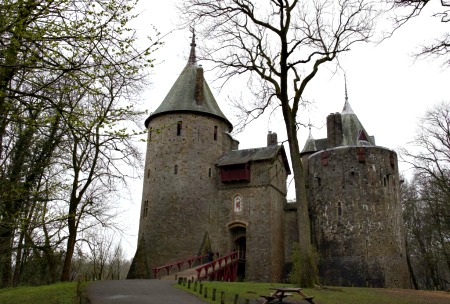 The fairytale home of Castle Coch stands high upon a hillside just a few miles north of Cardiff. Built in 1870 and designed by the architect William Burgess for John Crichton Stuart second Marquess of Bute, who was one of the worlds richest people.

The Marquess became enormously rich through the mineral trade of his Glamorgan estates and this allowed him to build his ideal palace anywhere he wanted with no restrictions.

The castle included impressive detailed turrets and even an operating draw bridge. Although the architect died in 1881, he had left clear instructions for the restoration of the castle and these were completed 10 years after his death.

The site of the castle was also the site of an earlier fortification, thought to be that of a motte and bailey design as artifacts have been recovered in the area dating from the 1100's suggesting the presence of military.

The castle is currently owned by Cadw and is open to the public as a tourist attraction, boasting its beautiful and ancient beech woods and its rock outcrops. Please check with the site directly to check any seasonal opening times.

There are thought to be two ghosts who reside at the castle, though there are many more stories which include the spiritual presence of the architect William Burgess and even the Marquess himself.

One of the stories which keeps popping up here is claims of seeing the apparition of a man dressed in cavalier uniform. The tale behind this one goes that when he was serving in the area he got hold of a substantial amount of treasure, which he buried at the site of what is now castle Coch. He comes back to the castle to check that his hidden loot is still safe.

This one to me sounds like a typical camp fire story, but the interesting thing is how many people have claimed to have seen this ghost, and claims of him being sighted go to at least the 1970's.

The next ghost is that of an unknown woman, she is just referred to as the "white lady" and is said to haunt the castle after the death of her son. Her identity remain unknown but its thought she was a servant who lived in the castle. The story goes that she was with her son in the castle grounds one day when he fell into a pool of water and drowned. The body is said to have sunk to the bottom of the water and was never recovered, distraught from this she died of heartache and lingers in the castle walls to this day.

This one again sounds like  typical made up ghost story, but again there are numerous people who have claimed to have seen her ghost. Whether the story is true or whether it was made to explain the presence of a spirit in the castle will never be known.

Another strange thing about this story is that Lady Bute lived in the castle following the death of the Marquis of Bute and is said to have been driven out by the constant appearances of the white lady.

Castle Coch - Back to top