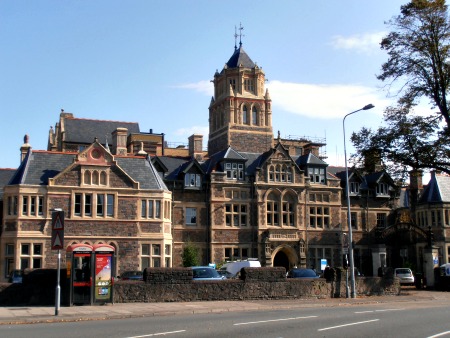 Situated in the heart of the city, Cardiff royal infirmary has been in operation since 1822 when it began as Cardiff dispensary. It was moved to its present location in 1837 due to needing more room if expansion was necessary and was originally known as the King Edward hospital. Its name was changed in 1923 to its present name and had a total bed count of 100.

The hospital expanded to keep up with the rapidly growing population of Cardiff and was increased to a bed count of 500.

Due to other medical treatment centers such as the University hospital of Wales opening the majority of the hospital was closed in March of 1999, with the exception of the west wing which remained open for clinical services and was manned by staff from the university hospital. The remaining 119 beds in the west wing continue to treat stroke, orthopedic and drug and alcohol related issues.

There are quite a lot of ghost stories to come out of the old infirmary, with many tales of people experiencing all kinds of paranormal activity here. Who the spirits are which choose to linger here though will never be known as there are simply to many people who have died within its walls.

One particularly story of the hospital comes from past security guards. It has been reported more than once about how a security guard was on duty at his post watching the monitor, only to see the figure of a patient on the screen standing only feet away from him were the camera was pointed, but upon looking up to were the figure should be there was no one there, and turning back to the screen the figure would turn back around and walk away from the guard.

A past worker at the hospital who was attending to do some plumbing work reported seeing a woman wearing a bonnet and old fashioned clothing on a number of occasions, as if she was checking up on him as he worked.

There is also a local legend that if an elderly woman wearing an old grey dress should appear and offer you a drink that you should not take it as those who do will be dead within a week, though this to me sounds like nothing more than a camp fire story.

Many people who have visited the hospital have reported the unshakable feeling of being followed through the corridors when no one is behind them, and the feeling of being watched when they are the only one in the room.

Cardiff Royal Infirmary - Back to top