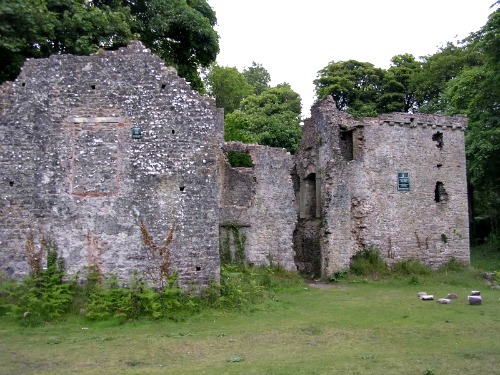 The name Candleston castle is thought to have derived from the first family to live there, the Norman family of Cantilupe.

The castle is thought to have been built around the mid 1300's with regular additions and changes through out the following centuries. It was constructed on the site of a previous stone building, though no one knows what this building was exactly since records don't go back in the area 800 years.

The last occupant of the castle used it as a farm house in the early 1900's and then after he left it fell into ruins. Today the castle is a complete ruin beyond restoration, covered in ivy and boasting an eerie but beautiful selection of wild plants such as violets and orchids.

Today the site is nothing more than a ruin which operates as a tourist attraction, but ghosts tours have happened here before by independent groups who found some interesting findings. If you wish to visit the site then please have a look at the local tourist information to check seasonal opening times.

Exactly who is haunting the ruins and why will never be know. Wales has some very deep history with ruins and artifacts being discovered all the time and there are many areas with no recorded history past a few hundred years, though people settled here thousands of years ago.

The is though to have been a village which was in the area that the castle was built in called Treganlaw, which is Welsh for the town of a hundred hands. There is reasonable evidence to suggest there was a town here, but the odd thing is that the town seemed to just disappear, no records, no spoken accounts, just gone.

What happened to the town and its inhabitants is unknown, though pieces of structure and tools have been found in the sand dunes of Merthyr Mawr, which are the second most mobile dune system in Europe.

Did the town simply get swallowed by the sand forcing the people to move? or is there a more sinister reason for its disappearance? the answer will never be known. The version were the town suffered an unfortunate death is one of the most common stories behind why this castle is haunted.

People have reported seeing dark figures, almost as if they are made of shadow moving around the chillingly quiet ruined walls. Orbs can be seen on photos taken throughout the ruins, with no particular hotspot, though they are not always present.

There are various stories of what paranormal activity goes on here, depending on which version is being told, but since no one will ever know for sure who or what lingers here, the best way would be to come here and have a look for yourself, and who knows, you may be another visitor who feels the chill down your spine as a shadowy figure walks behind you.

Candleston Castle - Back to top