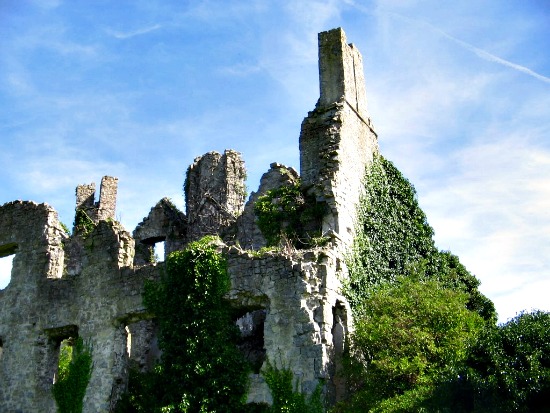 Boverton castle, which was originally known as Boverton place was built during the late 12th century during the reign of William the conqueror and its recognized founder is Robert Fitzhamon, though there is a version were William himself is responsible for founding Boverton as a farming community and the defensive structure was placed to protect his new village.

The original castle was torn down and rebuilt by Roger Seys who was a wealthy land owner and the attorney general of Wales during the late 16th century. He created a very impressive fortified manor house which was of considerable size for its day to rule his lands from with his family.

The Seys family were a well known name throughout Glamorgan during the 1600's but after they moved out in the later part of the century the castle stood abandoned and fell into decay over the next hundred years, with parts of the walls collapsing.

Restoration work was conducted on the castle during the 19th century, but this was short lived and abandoned due to funding issues and the castle was left to fall into disrepair. Today the castle is owned by Cadw and is open to the public, but due to it being reasonably small and in quite a ruined state it is not a main tourist attraction and visitors can just turn up whenever they like and walk the castle freely.

The castle has a few ghosts which seem to linger here, with the most well known of which being the "Black Lady". She was first reported by the workers who came to try and restore the castle before the project was cancelled during the early 19th century. She has been described as being a tall, shadowy figure who is dressed in a long black veiled dress which appears to be that of a mourning dress and her story goes as follows.

The castle was the property of the Earl of Gloucester during the reign of Richard I and the Earls daughter married prince John, who was later to become king. They lived happily married for around ten years but then John started to fall for another woman named Isabella of Angoulme. He married his new love and of course had to divorced Hadwisa before doing so, which broke her heart. Hadwisa returned to Boverton a broken woman and lived single in the castle for a number of years until one day John came into trouble with some of the barons on his land and had to hide at Boverton, under the protection of his former love. She was still deeply in love with him and protected him from the barons until the troubles had passed, only to see him leave her once again.

She is said to still linger in the castle and is thought to be responsible for faint crying noises which can be heard throughout, as well as being fond of placing her hand on people shoulders, perhaps for the enjoyment of seeing how scared they become when they cant see where it could have come from.

Boverton Castle - Back to top