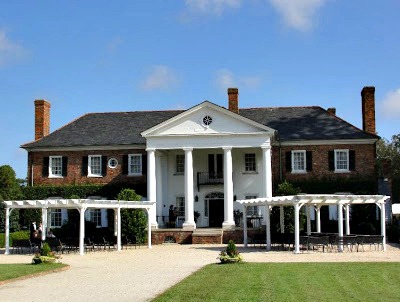 The earliest reference to the Boone hall plantation dates back to 1681 from a land grant given to Major John Boone. The land was a total of 470 acres and was given from Theophilus Patey to his daughter Elizabeth when she married John Boone.

The original wooden house was built on the the land in 1790, but was torn down to make room for the grander colonial revival style house which was built around 1940 by Thomas Stone.

The grounds maintain much of their history in the form on the keeping some early smaller structures, such as the nine original brick slave cabins which were built between 1790 and 1810. The smoke house which dates back to 1750, the cotton gin house from 1835 and the grand avenue of oaks which run for 3/4 of a mile from the entrance to the front house gates which were planted over a hundred years between 1743 and 1843.

The plantation was named as one of the African American historic places in South Carolina and has been open to the public since 1957 and makes great effort to preserve the original structures and gardens.

The exact number of ghosts at the plantation is unknown, but it is thought to be no more than 10. The most popular ghost story associated with the hall is a tale known as "The 13th step".

The story goes that during the 1700's a young girl named Ammie Jenkins grew up on the plantation and for many years played along side her childhood friend named Concha who was an Indian boy. On her 18th birthday Concha told her that he loved her and wanted to be with her, but she denied his advance thus breaking his heart.

Due to her beauty she was not short of attention from the opposite sex and quickly fell for one of her admirers, accepting his proposal of marriage. She never saw Concha again after agreeing to marry another but on the night before her wedding, an arrow was fired through the open window into her bedroom and struck her in the chest.

With her last bit of strength she managed to make her way downstairs to the front door where her fiance was waiting for her. She died in his arms on the 13th step. Legend then goes on to tell of how the blood stain would not be removed from the 13th step, no matter how much scrubbing was attempted to remove it. No one ever saw Concha again and it is believed that he is responsible for firing the arrow that ended young Ammie's life, perhaps hurt from being denied her love.

The blood stain on the 13th step is said to have been removed now, but people have claimed to have seen it clear as the day it was made, only to be gone upon a second glance. Her apparition is also said to have been seen sitting on the step, staring at the floor only to fade into nothing whenever someone gets to close.

As for the other ghosts at the plantation the spirits of past slaves are frequently reported. During its peak the plantation owned 225 slaves which it used to operate the dangerous kilns which produced building materials for the local construction industry from the year 1817 onward.

The hot spot for the sighting's of these spirits is around were the kiln stood, which would make a lot of sense as a number of slaves were killed when working at the kiln. The apparitions of a young boy and girl have been seen going through the motions of shoveling from one pile to another next to the kiln, as if they are stuck in some kind of repeating time loop.

Boone Hall Plantation - Back to top