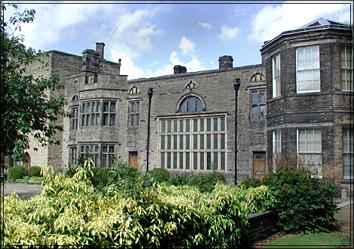 Bolling Hall is one of the oldest buildings in Bradford, it's still open as an education center and a museum. The oldest part of the building dates back to the early 14th century.

The building has changed hands several times and been used for many different things, including a royalists base during the English civil war in 1600's. In 1915 the hall was opened as a museum and remains as one to this day.

The Hall is bradfords most famous haunted building, even having a visit from Living's Most Haunted team. The first ghost sighting was reported in 1643, and since then many reports of paranormal happenings have been experienced.

Various sounds haunt the rooms of the hall, including those of a baby crying, ghostly whispers and doors slamming. Various sightings have been reported but the most common have to be that of a man wearing a long 15th century style coat, a woman in a ball gown and that of various characters from the 17th century, such as soldiers and servants.

Bolling Hall - Back to top