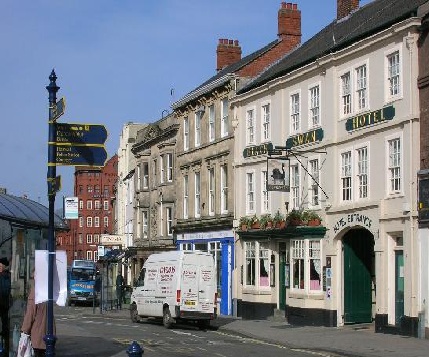 The Black Swan Hotel is located in the center of the town of Devizes overlooking a picturesque Market place, this former Coaching Inn dates from 1737 but the cellar beneath the building is said to have been built prior to 1600, once part of a lavish network of tunnels underneath the town.

The pub was once owned by *alleged* highwayman Ambrose Saintsbury and is set in the town square right in front of where gallows once stood! It's said the present-day function room was once a court of judgment, and a meeting place for local Freemasons...

The most frightening room in the hotel is number 4. Strange things have happened to people; tingling feelings for no reason, sighing noises and the temperature has been seen on a thermometer to jump from 12 degrees to 28, with no apparent heat source!

A very strange thing also happened to one of the new proprietors, Yvonne Wright, before she'd even moved into the building! She was lodging in the hotel one evening and woke up in the night, only to find herself trying to open a non-existent door in room 12.

It was only upon watching a Most Haunted clip on youtube later that she discovered that one of the show's mediums had actually felt that their used to be a door in the very same place!

Could the phenomena in Room 4 be caused by the spirit of a young woman, who has been seen walking across the floor and leaving through a nearby wall? She is believed to have been pregnant when she died in mysterious circumstances. She's has also been seen sat at the window crying, while looking out onto the market place below.

Also, the ghostly figure of a man in a top hat and shabby coat has been seen sat in the corner of the restaurant. So convincing had this apparition been, that staff have actually been convinced someone has been there, waiting to be served!

Black swan hotel - Back to top