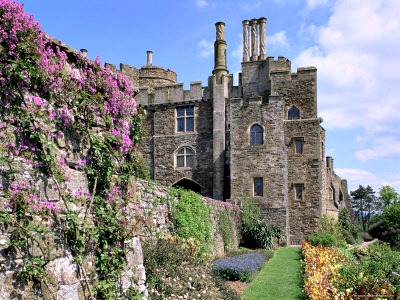 Berkeley castle is the oldest continually occupied castle in England after the tower of London and Windsor castle. There has been a fortification at the site of the castle since 1067 when a motte and bailey fort was built here by William Fitzosbern shortly after the Norman conquest of Britain.

Construction of the castle which stand today was started in 1153 after the owner, Fitzharding received a royal charter from King Henry II granting him permission to rebuild the castle. He built the circular keep in 1153 on the site of the old motte. The only other addition was the construction of the curtain wall between 1160 and 1190, after this the rest of the castle was built during the 14th century.

The most famous story associated with the castle is the murder of Edward II on September 21st, 1327 after he was betrayed by his wife and her new partner. He was killed by unknown means though the popular stories of how he died include a red hot poker and suffocation. The cell which he was killed in and the dungeon he was held in for several months can still be seen today.

The castle has been the site of many battles and played an important part in the various wars of England, and so has received a large amount of attention, both from the media and from many historic societies. The castle has had 2 royal navy ships maned after it and been the site of various scenes in movies and TV shows.

Today the castle is open to the public as a tourist attraction but please check with the venue directly to check and seasonal opening times.

As you can probably guess the most well known ghost to haunt the castle is that of Edward II himself. He was badly betrayed by his wife and kept imprisoned here for some months. Some of his supporters stormed the castle and rescued him but he was later recaptured and brought back to the dungeons.

There are many stories about how Edward manifests himself at the castle, from apparitions to orbs to things being moved around in empty rooms. But the most commonly reported incident is that of his pain filled screams. There are many version of how he was killed at the castle, but the most popular of which is the red hot poker. The story goes that he was fastened to a table naked face down were a funnel was shoved up his rectum. A red hot spike was then taken and pushed up the funnel, burning his organs directly while still inside him.

This cannot be confirmed however and there are various stories about how he wasn't recaptured but instead an imposter was taken and executed as part of a bride to the right people. Whatever the cause, on the anniversary of his death all manor of chilling noises can be heard coming from the room were he died, including screams of pain and banging noises so loud they can be heard within the court yard.

Berkeley Castle - Back to top