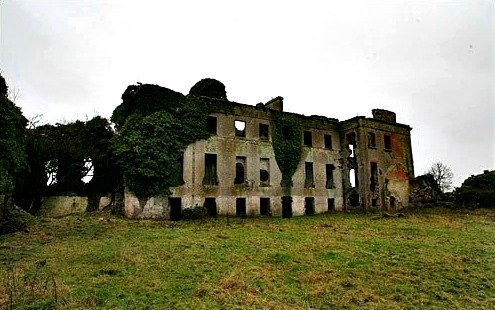 The Croker family built Ballinagarde House in 1774 after moving here from Devon, England.

The house was built to impress and reflect the large personality of the head of the household, Captain Edward Croker, who made this 2 storey house to have 5 front bays and an ionic porch, as well as classical statuary and a fine Hercules statue in the gardens.

The estate did not last long after it was completed as Captain Edward Croker bankrupt it through his bad business decisions. He was even described as 'a worthless spendthrift who brought up an arrogant race of blockheads of both sexes'

The Croker's were not very popular in the local area and were known for their unpleasant personalities and stubbornness. A well known story of the Croker family comes from the death of John Croker, who as he lay terminally ill on his death bed would not take the word of his clergyman son, Robert who tried to convince him he was going to a better place. His final words are even documented after Robert told him 'There's a land that is fairer and better than this you'll regard', to which John replied simply "I doubt it", before shutting his eyes and dying.

This story became well known in the local area and the house became known as 'I Doubt It Hall'.

Ballinagarde House was also the home of Richard Croker, who became known as "Boss Croker". He was the head of Tammany Hall in New York city and also owned various other business's such as a racing stable. He was a famous figure in his day and was known for being quite corrupt, taking bribes from various illegal business's in New York. His Funeral in Ireland was attended by some of the countries most influential figures and was even covered by England's most popular newpaper of the day, which was "The Times".

After Captain Edward Croker bankrupt the estate it fell into ruin. Today the house is little more than a shell but much of the original layout and structural features can still be seen.

There are a few claims about the ghosts which reside at the house, and they include all the usual tales of things such as orbs and shadowy figures, but there is one story which stands out above the rest.

Now you have to understand that Ireland is quite a religious place, and during the time the Crokers occupied the house this was even more so. There are various stories about how the devil himself has visited various places across the country, and Ballinagarde House is no exception.

The story is set during the time Captain Edward Crocker held the house. One day he was out in his carriage when a mysterious figure in a dark cloak appeared along side his carriage on horseback and began a conversation with him along the road. Edward took a liking to the rider and invited him to dinner at Ballinagarde.

They stayed up all night talking and drinking and during the early hours of the next day, the stranger collapsed from all of the drink, but when a servant removed the strangers boots he found a pair of hairy cloven feet, and later on found hoof marks seared into the floor where he had stood up before leaving. Today a phrase still exists in the local area which is “as sure as the devil was in Ballinagarde”, which simply means that something is a fact.