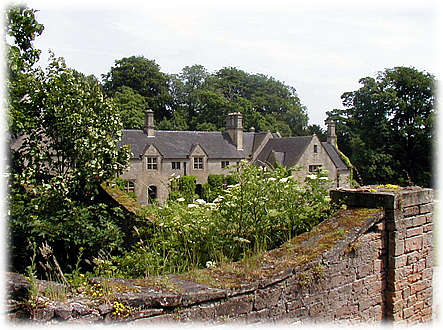 Annesley Hall (not to be confused with the Canadian College building of the same name which was the location for the hit movie "Black Christmas") was the ancestral home of the infamous Chaworth-Musters family.

It's been empty since 1997, when a fire caused considerable damage to the hall. Originally built as a hunting lodge in 1156, it was once the home to Mary Chaworth who was the true love of famous poet Lord Byron. It's even rumored that Robin Hood called this place home for a time...

A ghostly black shape of an old man has been witnessed many times near the entrance and staircase by the ex-caretaker, along with the apparition of a young girl near the laundry room.

She's thought to be the spirit of a girl who fell pregnant to one of the landed gentry and hung herself - in the room later used for laundry. In fact, when electricians were fitting electric cables in the hall, they found bones under the staircase. After they were sent for analysis, they were found to have once belonged to a pregnant woman...

Other occurrences that have been witnessed over the years include stones and firewood being thrown violently by unseen hands, a strange lavender-like smell that comes & goes, huge orbs of light and snorting and whispering noises. All these things happened while the building was occupied... imaging how scary it must be now, now it's been ruined by fire and its completely empty!

Annesley Hall - Back to top