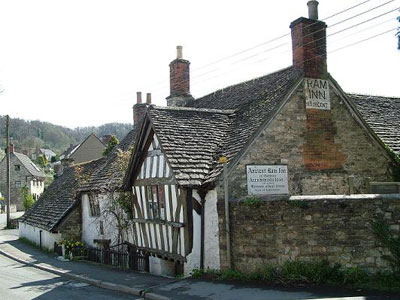 The Ancient Ram Inn was built around the year 1145 over a 5000 year old pagan burial ground and on the crossing point of two lay-lines, The Inn is the oldest building in Wotton-Under-Edge. It was originally built to house masons who were constructing the nearby St Mary's Church.

Oddly enough there is a hidden tunnel from the Fireplace in the bar to St. Mary’s Church and another to Lacock Abbey, possibly used by highway men and other wrong-doers? Over the years, this infamous pub has seen black magic, devil worship and also "countless" murders, mysterious deaths and even exorcisms...

Visitors often describe the Inn's atmosphere as oppressive, even evil. John Humphries, the owner of the inn has actually been thrown across rooms, rocked violently on a chair and has even seen people and furniture being hurled down flights of stairs! Could these violent outbursts have been caused by a mysterious black shape whose identity is unknown?

The most terrifying room is the "Bishop's Room" which is inhabited by 2 female spirits who often interfere with electrical equipment and cause the temperature to plummet without warning. In fact, the "demonic" temperatures were so cold during 2006 that owner John (sadly) closed the inn to ghost hunters for good.

Ancient Ram Inn - Back to top