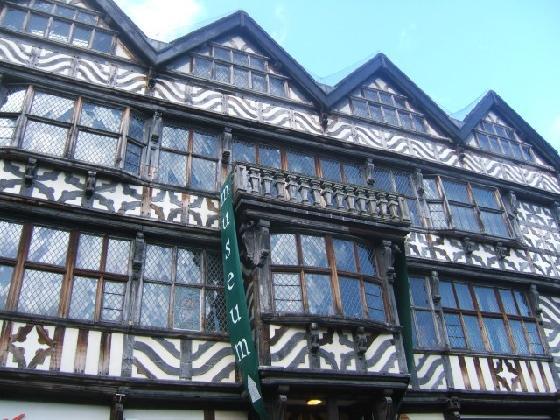 The building dates back to around 1595 and would have definitely shown the wealth and social standing of anyone who was lucky enough to call the place home.

During its long & illustrious life, its acted not only as a home but also several shops, a wealthy school for girls and is currently a museum, featuring many mocked-up period rooms.

The most active and frequently reported spirit is that of William Marson, who was born in 1840 and worked, spent most of his time and died in the building. He ran a family business with his 2 sons and people often report a man wearing an apron and a bowler hat wandering around - funnily enough - the "shop" room of the museum.

A little girl has been reported running around in the "Victorian room". She's thought to be a former student from the girl's school, around 10 years of age and suffered an accidental death involving horses. In the same room, an elderly lady has been seen, rocking backwards and forwards on a rocking chair. Mediums think her name was Alice and she was a nanny (or similar) for the girl's at the school.

One of the most shocking hauntings at Ancient High House is the figure of a man, seen wandering up and down the staircase. It happens with such startling regularity that the police were once called to investigate.

An eyewitness gave the officer a description of the man. The police officer was shocked to realise that the witness was describing a man who used to work in the building and has passed on some time ago! The man is thought to be a dentist who used to work nearby - possibly an adjoining building. More evidence of his presence is that EMF meters jump massively in the exact spot he's seen.

Ancient High House - Back to top