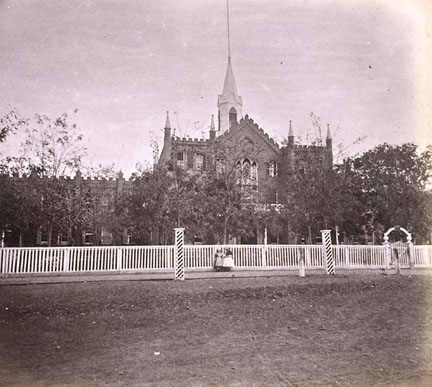 For some reason it's been very difficult to find any history on the Alameda Insane Asylum, as for an actual date of construction I can only give the estimate that this site is easily over 100 years old. It was used as a hospital for the insane until it closed down for reasons unknown.

The site has been abandoned for many years and even the current owner seems almost impossible to find. Guards patrol the site on a regular basis to stop trespassers entering the building.

I apologize for not being able to provide a more accurate history. If you know of any historical information on this site then please send me a message in the contact area. Thank you.

(UPDATE) I have been informed that the asylum has now been torn down, however it still makes a good tale so it'll remain on the site.

The amount of ghost stories from this building are massive. As with all old asylums, there are countless accounts of patients being treated very poorly. Stories include patients being tortured, murdered, beaten and abused as well as having to live in appalling conditions. Suicides also seem to be a common occurrence at this site, with the basement being a favorite area to commit suicide by hanging.

Ghost stories include hearing loud screams from distant rooms within the hospital, the feeling of someone standing behind you and of being watched.

Ghostly faces appearing in windows, blinds and curtains opening and closing by themselves, the apparition of a young boy running through the corridors, and a huge amount of other sightings of ghosts of all different types of appearance.

It would seem that from the stories this site is one of the most haunted places in California, the building is completely abandoned and has been for some time, maybe the secrecy of its past and the area being paroled by guards has something to do with this?

Alameda insane asylum - Back to top