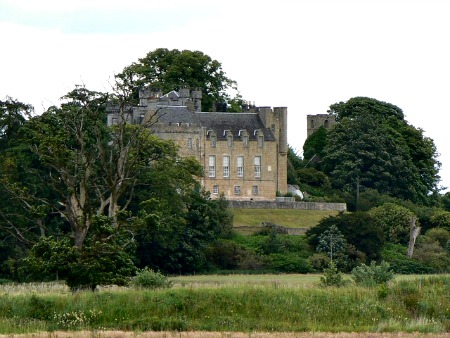 Airth castle is a stunning manor home overlooking the river Forth and the village of Airth. Built on a previous defensive structure which was destroyed, the earliest still standing part is the south-west tower which was built in the late 15th century.

Major additions were made during the 16th century which included an extension on the tower and a north-west wing, turning the building into an L-shape.

In the early 1800's an architect named David Hamilton was hired to fill in the space between the arms of the L shaped wings and he did so with the triangle shaped block which the castle is now commonly recognized by.

Today the castle is operating as a hotel and spa and boasts some stunning architecture and grounds.

Though not home to the most amount of ghosts for a Scottish castle, Airth can still hold its own against some of the other most haunted places in the country. There are thought to be only a handful of ghosts here, with the exact number not being known as different investigation groups seem to come up with rather varied answers, but its thought to be around five.

The most well known of which is the ghost of a nanny and two young children. The story goes that they were inside the castle one day when a fire broke out, and though they tried desperately to escape, they were the only ones who got trapped and burnt to death. People have reported seeing the apparition of a nanny with two small children standing next to her, all staring blankly at the ground before fading away when someone gets to close.

Perhaps the two children are also responsible for the activity in rooms 3 and 9. guests and staff have reported hearing the sound of children crying coming from inside the room when it is known to be empty, with no identifiable souce upon investigation.

The next ghost is that of a servant girl who worked at the castle. Her master treated her very poorly and this treatment eventually led to him being psychically abusive to her. One day the maid made the smallest of mistakes and her master flew into a rage with her, beating her to death. Her apparition has been seen as a ghostly mist like figure dressed in Victorian style maids cloths.

Airth Castle - Back to top