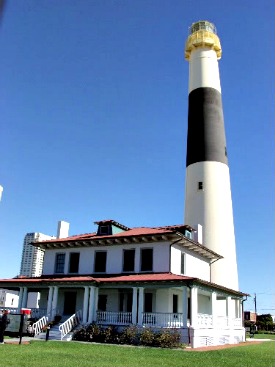 Construction of the Absecon lighthouse began in 1854 and was completed on January the 15th, 1857. The light house was built in the area after a tragedy in 1854, were a side wheel steam frigate ran a ground and the resulting accident saw over 300 lives lost.

Created by George Meade it still has its original lead glass lens which weighs a staggering 12,800 pounds.

The Light house stopped operating as a navigational aid in 1933, though it still shines its lights every night out of tradition. The light house is now open as a tourist attraction and one can climb to the top for a small donation toward its maintenance. In 2002 a gift shop and museum was opened in an area which was converted into a recreation of the keepers quarters.

There were no deaths at the lighthouse itself, though various ghosts stories have been created with tales of people committing suicide by jumping from the top, but there seem to be entirely fabricated. However there doesn't have to be a death at a location for a spirit to have a reason to stay there.

As with many haunted lighthouse you can find a classical sign of a lingering spirit here, which is the smell of cigar or pipe tobacco coming from an unidentified source. This in itself doesn't sound like much but early day lighthouse keepers were typically pictured as pipe smokers, sitting for long hours in small lighthouse room with nothing but their pipe and a book for company.

There are also reports of a seemingly mischievous spirit here, which has been known to laugh at visitors and also to make the noises of footsteps climbing up behind people which can be quite a shock to think someone is right behind you only to turn round to empty stairs.

The only other occurrences here other than the usual orbs is the appearance of apparitions, which have been seen after dark only. Various people dressed in anything from 1800's war uniforms to civilian attire, wandering around the bottom of the lighthouse looking confused and lost, until fading away into nothing.

Non of the ghosts have ever been identified as there are no leads since no one actually officially died here, but various ghost hunting groups and scared visitors will all agree the place is certainly haunted.

Absecon Lighthouse - Back to top