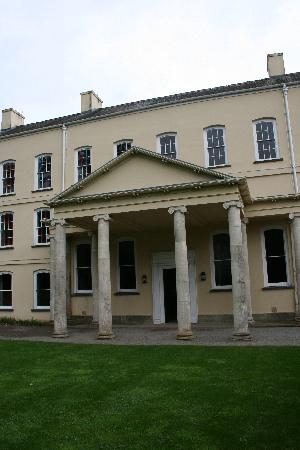 Details of exactly when Aberglasney house was built are hard to come by, but the area has certainly seen its share of violence and bloodshed, with a particularly gruesome battle happening there in 1257.

During the Middle Ages, the area around the House was the center for bloody battles with the nearby fields still echoing the memories with names such as Cae Tranc (field of vengeance) and Cae'r Ochain (groaning field).

Although no documents exist, Bishop Rudd is generally thought to have acquired the estate sometime around 1600. The house stayed in the family until 1710, when it was sold on to the Dyer family until it was put up for sale again in 1798.

The house was passed down from family to family before being occupied by troops like most large manor houses during World War 2.

9 years after the war ended in 1955 the estate was split up and the house and farm were purchased by a local man named David Charles who left the building abandoned which lead to it falling into decay.

Finally after falling into almost complete disrepair during the later part of the 20th century it was bought by the Aberglasney Restoration Trust in 1995.

The first odd tale begins in the 1630's when a maid saw five candles floating around the newly-plastered "blue room" in the home. The next day, 5 maid servants were found dead in their beds. A stove left burning to assist in the drying of plaster had asphyxiated them.

This is thought to be one of the most active rooms in the house with many people having had strange experiences whilst being inside. People claim to have been touched, or felt something brush past them.

Another chilling tale from the house comes from the 1930s when the building was empty, ivy had grown over the windows and was being cleared away by two men. When one of the workers cleared away ivy covering the blue room's window he shot back down the ladder claiming to have seen a woman's face peering out back at him!

Aberglasney House - Back to top