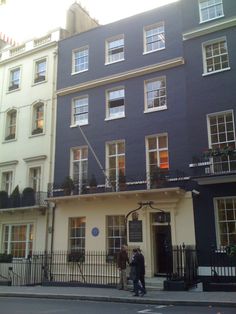 The history of 50 Berkeley square is rather plain unfortunately as it was just a simple town house. It is a four-story brick building constructed in the late 18th century, and served as home to the British prime minister George Canning between the years 1770 and 1827.

Since the year 1937 the house has been occupied by a firm of antiquarian book dealers called Maggs Bros. During a review of historical buildings in 1998 it was thought to be the oldest building in London which remains unaltered.

The house is also considered to be the most haunted house in London but this may be due mostly to the hype it received from being featured in a book called "haunted London" by Peter Underwood.

Since the building is now owned by a private business you wont be able to have a look around without getting permission, but the building is featured on ghost tours of the city.

The stories of the haunting's at 50 Berkeley square are rather varied and there are lots of different accounts of what happened to cause the haunting's, but i shall list the most commonly heard tales.

The most haunted area of the house is thought to be the attic which is haunted by the spirit of a young woman who killed herself by jumping out of one of the top floor windows. She is thought to manifest herself in two different forms, a brown mist and a ghostly white mist like figure, both thought to be capable of scaring a person to death. Another version of why the attic is haunted tells of a man who was kept captive in their and was fed through a small hole in the door. Being deprived of human contact and being confined to the room he eventually went mad and killed himself, though there is no real evidence for anyone being locked within the attic room until death and this is likely just a camp fire story.

During the 19th century there were in fact two deaths which occurred within the attic room under strange circumstances. Also the British prime minister George Canning claimed he experienced paranormal activity while living at the house, including claiming to have heard strange noises and experienced psychic phenomena.

In the year 1885 the house was bought by Mr Myers who is said to have recently broken up with his fiancee. It's said that he would lock himself in the attic room for many hours at a time and slowly turned mad for the rest of his life. During this time the house fell into disrepair and its appearance turned from modern townhouse to ghostly looking old building. It was during this time of neglect that the house's reputation for being haunted grew rapidly.

So much so that in 1872 Lord Lyttleton took a bet that he couldn't stay in the attic room for a whole night. He brought his shotgun with him and during the night he saw an apparition form in the room which he shot at, only to find no trace of any kind of intruder in the morning.

The house was even let off by the local council for not paying taxes due to the house's haunted reputation.

During the year of 1879, Mayfair reported that a maid who had stayed in the room overnight was found in the morning to have turned mad, she was taken to an asylum but died the next day.

The morning she was found a nobleman was challenged by one of his friends to spend a night in the haunted room, which he accepted. This is the first life the house itself claimed as the next morning he was found dead with the official coroners report being that he died of fright.

There are also stories of someone who stayed in the room and the next day they were found to be paralyzed with fear, with their ability to speak never returning after spending a night in that room.

The next life to be taken out of fear was during the year of 1887 when a group of sailors from HMS Penelope stayed at the house overnight. In the morning the sailors reported to have seen an angry looking apparition who appeared to have lunged at them, with one sailor being so terrified he tried to flee the house only to be found in the morning lying on the floor dead, but with no wounds which could be responsible for taking his life.

Since the Maggs Brothers bought the house in 1937 the paranormal activity has stopped there and not a single occurrence has been reported, but how can such a terrifying building which is said to have literally scared people to death just stop being haunted? Why would the spirits leave so abruptly and where have they gone? It seems that this particular haunted house has created many more questions than answers.

50 Berkeley Square - Back to top