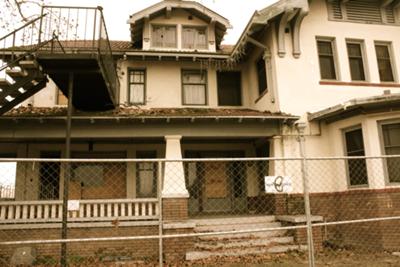 The front of Wolfe Manor 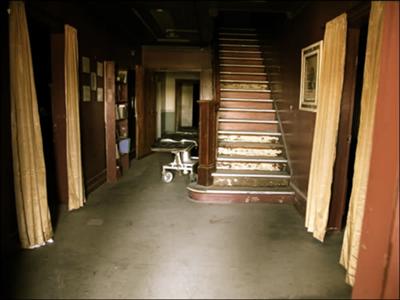 Stepping inside the front door

In 1922 the Wolfe Manor(renamed by current owner, Todd Wolfe) was first built as a private residence by Anthony Andriott, who later went bankrupt due to the cost of building and lost the house. Then in 1935 the mansion was purchased and became the Hazelwood Sanitarium, treating patients with terminal illnesses. sold again in 1942, the Hazelwood Sanitarium then became the Clovis Sanitarium which was licensed to treat the mentally ill.

Many former employees have been interviewed stating that patients were treated poorly and there were far too many deaths. After being hired and experiencing the supernatural occurrences and witnessing the treatment of the patients, employees then quit. Clovis PD has been interviewed as well reporting that they have received several 911 calls from the property even though there is no working power lines.

In 1997 Todd Wolfe purchased the old sanitarium renaming it, Wolfe Manor. He opened this mansion as one of the scariest Halloween attractions in the state of California. People started experiencing things such as cold spots, feelings of being touched, and have seen shadows and heard various voices. After being investigated by mediums and paranormal investigators they started researching the history coming to the conclusion that this mansion is in fact very haunted. Some paranormal investigating teams include Ghost Adventures, Ghost Hunters, and even local investigators, Martinez Paranormal.

Due to the lack of power and the safety risks put upon visitors the city of Clovis forced the shutdown of Wolfe Manor. Though it is shut down to the city, people still know the stories of the mansion and the ghosts that roam the halls. The most famous are an elderly woman, Mary, a younger girl, Emily, and a strange figure they have named man baby. Although those are not the only dead living on the property. There are hundreds of others dark entities that live on the 8,000 square foot residence.

Todd Wolfe plans to reopen this dark mansion up to the public again by investing his money in the refurbishing of the mansion its self and the building of the Wolfe Manor Hotel. Speaking to Todd i have learned that this hotel is planned to be booked year round. It will be completed with a dinning hall and a bar in the old kitchen.

I have experienced many different things in this mansion such as chills, being pushed, a feeling as if im being watched, and feeling very sick to my stomach and light headed. To hear more about the Wolfe Manor you can research which paranormal shows have been there or even watch MartinezParanormal on YouTube.com.