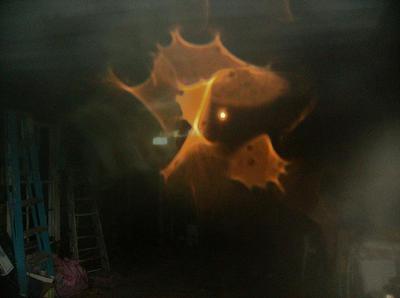 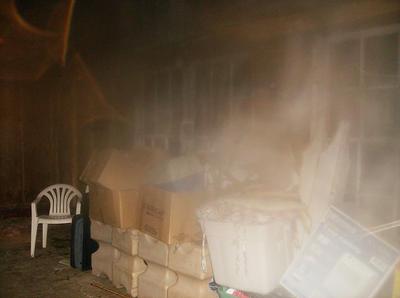 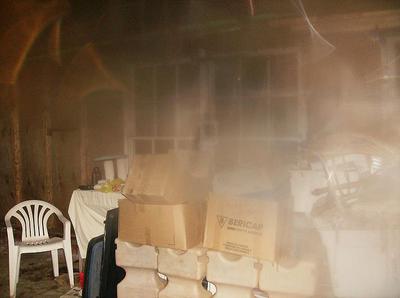 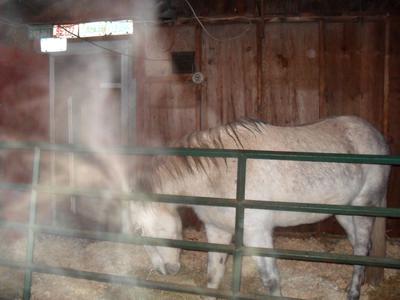 white mist only around this pony

After several years of helping care for a Mum with dementia, she passed away and I went looking for a peaceful place to rest and heal. I found the perfect little spot in a quiet village outside of my hometown, with a farm located just down the road where I could stable my 2 rescued ponies. I looked forward to quietly rebuilding my life.

Shortly after moving onto the property, the conveniently located farm didn't work out. So I fenced off my over-sized lawn and turned the garage/garden shed into housing for one car and 2 ponies, known thereafter in the village as "The Garden Gnomes" or as I called them, "my lawn ornaments".

The first indication that something wasn't quite right with the garage/garden shed/stable was the day I decided to share it with the ponies. The previous owner had left the back part full of garbage and it was spilling out the back door. I took lots of pictures to show how bad it looked before I began my conversion and then rolled up my sleeves and got to work.

It was a hot day so every time I took a break, I walked around the grounds and snapped pictures of the enormous 100 year old trees, the flowering shrubs and the shaded pathways through the little strand of woods at the back.

When I finally finished and had ample room for 2 ponies and a car, I went inside to the coolness of the house, curled up with a cold one and proceeded to download the pictures onto my computer. I couldn't wait to see the fruits of my labor.

The pictures of the property and the house were gorgeous - crisp, bright and colorful. But every single picture of the garage showed a misty form.

Later that day I walked the ponies over to their new home and just before bed I went out to check on them and to say goodnight. As I was standing there scratching their necks, a man's loud, raspy voice behind me said distinctly in my ear, "Do you know what happened to Celeste?" I jumped a foot and turned around expecting to see a practical joking neighbor, but I was totally alone, except for 2 ponies, a cat and a dog all standing perfectly still, ears pricked forward, staring at something, or someone in the corner that only they could see.

I don't know a Celeste. I never have.

A little while after this I was driving home around 10:30 pm. It was a clear summer night with a bright, almost full moon, the type of night where you hardly need headlights. As a I reached the edge of my property and was slowing down for the turn, I just missed hitting him. He came from nowhere, running up out of the ditch and across the road in front of the car. My first impression was that he looked like a silhouette, the whole image was charcoal grey, except for his black hat. He wore a box cut jacket with wide stovepipe pants and his hat resembled Abe Lincoln's, only not quite as tall.

He was running stooped over, with his upper body tilted to about 2:00 and he was running with an odd kind of gait. He was moving with long, exaggerated steps in big, clunky boots, lifting his knees high. Strangely, his head didn't move. It stayed smooth and level in spite of all the movement below.

As I slammed to a stop, it dawned on me that his feet weren't touching the ground.

He reached the ditch on the other side of the highway but he didn't go into it. Under my neighbor's dusk to dawn light, he just disappeared.

The next day I was relating my story to an old childhood friend with whom I once shared an incredibly haunted house and who now worked just around the corner. But she didn't have the reaction I expected. In fact she was very quiet and asked me to describe him again. After I did she told me that one of her co-workers had come in that morning in an extremely agitated state, so much so that she went home a short time later. She said she wanted to be with her husband because they were both so unnerved that neither of them could work. She said that as they were driving home the night before, a man ran up out of the ditch, a man who ran bent over with a funny gait, a large square hat, big heavy boots and whose feet weren't touching the ground. He ran directly across the road in front of them, then just disappeared.

He came out of the ditch in front of my garage.

Later on that summer I decided to take pictures again because by now I had painted the trim on the house, the flowers were in full bloom and the white fences I had put up for the ponies had transformed the property into a proper little hobby farm. The camera had been sitting on my dresser without batteries for weeks. So I bought new batteries, a new card and went for a walk around the property. I took pictures of the house, the ponies in the paddock, the flowers, the wooded paths. But when I went inside to download the pictures there were 3 that should not have been there. In the middle of the beautiful pictures I had just taken, with my brand new card, were 3 pictures that had come from the garage, from a time months ago, before it became a barn.

I sent all 3 pictures to a professional photographer but he came back to say he could open the 2 with the mist but the 3rd was just an orange blur. The next time he replied that the strange orange thing came through but that it was a copy of a copy of a copy and that he needed the original. I told him it was the original and then downloaded it again from the camera and sent that one. However, I got the same answer. It's a copy of a copy... This picture was going nowhere.

So I went online to research paranormal pictures, contacted the most popular site and sent them an email about some of the happenings in the garage, along with the 3 photos. They immediately got back to me to say that the mist pictures were great but they couldn't open the 3rd, the orange blur. Two more attempts and I knew it was a waste of time. However, they asked if this mist seemed to focus on the ponies in any pictures I had taken. In fact, the mist is always present around the white pony and in some it's so thick you can hardly see him. I was advised to go into the garage and assure them (?) that nothing would be done with the pictures without their permission. Then I was to attach a picture of the ponies along with the photo of the orange thing. So I did as they suggested. The images went through perfectly and the orange thing is now a featured photo on their site.

What is it? There have been lots of suggestions, but so far, no definitive answers.