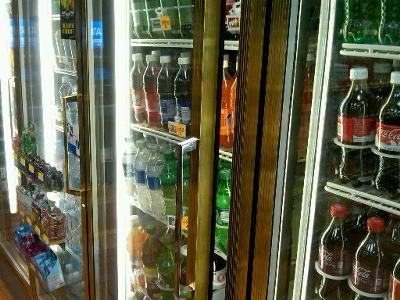 The door opened by itself last night

The Shell in Verona is haunted. At night the cooler door where the Sprites are will open, several times a night actually. And there isn't anyone else in the store. I was told by one of our regular customers who works at the Food Lion that both stores are on top of an Indian Burial Ground, that's what someone told him. I can believe it. One of my other regular customers who works at Food Lion was in the store talking to me this past Halloween (31 Oct 2011) and we were just standing there talking when all of a sudden we heard a loud sound that sounded as if an old wooden desk was being moved. The sound came from the area where our Cappocino Machine is. We stopped talking & looked over there but nothing was moved. We went in the office and nothing had been moved. The desk in the office is metal anyway. We knew where the noise came from but we never figured out what the noise was. Past employees who worked at the store said the place was haunted and that they had heard things as well. Both stores are haunted.