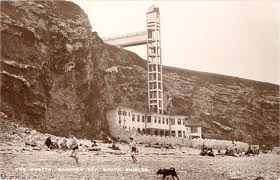 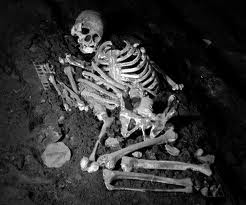 Out of a small cave, he blasted his way to a bigger one which he and his wife made into a home. It is thought he was already eighty years old when he moved into the cave. He and his wife made an unusual pair, known for their eccentric choice of habitation, and it didn’t take long for people to start visiting the curious pair in their strange new home.

The steep, zig-zagging stairs are thought to be his handiwork and were often referred to as ‘Jack the Blaster’s stairs’.

Obviously one to make the most of an occasion, Jack the Blaster began supplying food and drink to his visitors, for a profit of course.

It has been variously suggested that he was embroiled in many nefarious smuggling activities. Not difficult to understand since the coastline’s caves had long been a practical place for smugglers to hide their contraband cargo. Jack’s grotto must have been an ideal place for weary smugglers to shake off the cold, fill their stomachs and sink a tankard or two.

While Jack and his wife were certainly the two to found the grotto, it was its second resident, Peter Allan, who had the spirit and foresight to make a far more accessible and developed enterprise of it. He too had worked in the local limestone quarry and struck upon the notion of living in the cave while similarly providing refreshments to the many visitors who came to the beach. Winning a modest sum at the races, he set up his rudimentary enterprise and, in 1828, used the profits to set about a proper large scale excavation of the cave which Jack the Blaster had begun.

His venture drew unfavourable interest from the HM Customs office, since his claim that his was to be an honest enterprise was somewhat questionable given the history of the coast and the Grotto itself. Like Jack before him, he may well have participated in a few illicit dealings.

Although under close scrutiny, he persisted and was grudgingly granted a license to carry and sell ale. His excavations took years, but he eventually succeeded creating a cave of two-storey height which included a kitchen and a ballroom.
He turned Jack’s original cave into an inn. During the excavations, some 18 skeletons were discovered. Their presence was quickly ascribed to the all too common end of those engaged in unlawful dealings.

In 1848 a dispute over land ownership resulted in Allan being charged rent for his home and inn. This caused him a great deal of misery, leading to a funk which endured until his death the following year.

However, his family of eight children and a wife ran the business successfully until 1865 when a cliff face collapsed and did considerable damage. Although they saw to the reinforcement of the inn to safeguard against further damage, they eventually left the area in 1874.

Various companies set up business in the Grotto and did lots of refurbishment to the interior and to the outside building, cosmetically and structurally, but it was Vaux Breweries who finally installed the lift and used the Grotto for over a century.

No story of smugglers, skeletons and a character named Jack the Blaster would be complete without a ghost. Indeed, the place has more than one. The most popular local legend is that of a smuggler who betrayed his confederates to HM Customs. Upon being found out, his old friends hung him in nearby cave called Smuggler’s Hole to taunt him and pelt him with whatever was at hand.

It is said that his wails can still be heard. The Grotto’s reputation for being haunted aroused the curiosity of Paranormal Investigators who have claimed they found no less than seven separate tortured souls.