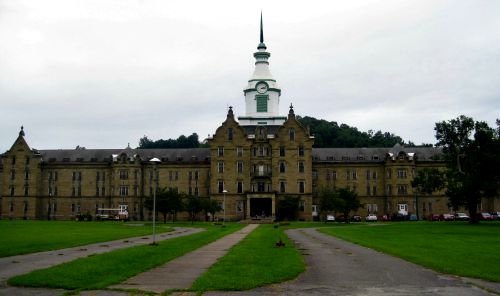 I love writing about old insane asylums, there really isn't enough bad things to say about them. The trans-Allegheny asylum is one such place where you can bet your last dollar that you'd be better off pretty much anywhere else than in this place.


Construction began in 1858 but the doors didn't open until 1881 after a much longer and much more expensive than expected building time. It was originally built on the designs of architect Richard Andrews to hold 250 people, but with most asylums it quickly went over capacity.


By 1880 there was an official population of 717, and this trend would only get worse by 1938 when it had 1661 unlucky guests, peaking in the 1960's with well over 2600. Considering the building was only meant for 250 people, this meant that all the medicine, treatment and facilities intended to be used by one person would now be shared between just over ten people.


When you arrive at such a place you can expect the luxuries of the modern facilities such as the electric chair and lobotomy rooms. Also one commonly believed cause of insanity at the time was thought to be infection, which meant that if you were on the outside it was simply a bad tooth, but inside the asylum it was a cause of mental illness and would be removed, as would infected limbs, and since basic medicine such as anti-biotics didn't exist then this happened a lot more than you may imagine.


The asylum declined in patient numbers dramatically during the 1980's due to changes in mental health treatment and lack of modern facilities. This led to an order for a new mental health hospital to be built and the the trans-Allegheny asylum to be converted into a prison.


However the asylum officially closed its doors in 1996 and has since stood abandoned, with building projects never seeming to materialize. Today it stands as a national historic landmark and is still vacant.

Is the Trans Allegheny Asylum Haunted?

There's probably isn't an asylum that still stands from the 1800's that isn't thought to be haunted, but this one seems a little more active than most others, making it one of the most haunted places in the state.


As for actual spirits they are all believed to be past patients of the building, which included murderers and rapists who were sent here after being deemed criminally insane.


There are all kinds of stories about what actually happens here, but this is one of the most well investigated haunted locations in the state, possibly in the country. There have been numerous groups come here to document the spirits, but one of the most well known is the American group known as "TAPS" who filmed an episode here and then returned again for their 200th episode since they loved the place so much.


But the most notable investigation happened on Halloween of 2009 when the Travel Channel aired a seven hour live broadcast of the asylum for the TV show "Ghost Adventures".


Cameras were set up throughout and viewers could text in and swap between cameras themselves online. The event captured quite a lot of evidence, such as strange muffled voices and sudden pressure changes and a strange object appearing throughout the building on the thermal cameras.