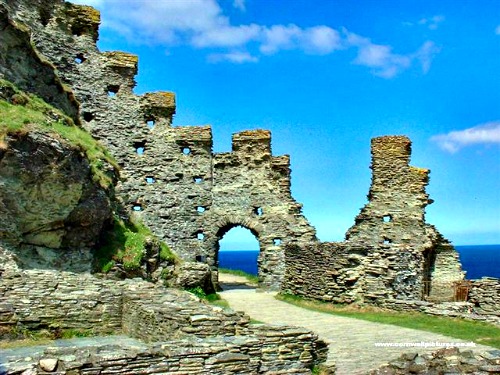 Tintagel castle has a rather plain history compared to most other castles. As many have been passed down through various family's and ownerships, Tintagel has only ever had one owner before it fell into ruin, never to be repaired.

It was built by Richard, Earl of Cornwall during the 13th century after Cornwall had been submitted into the kingdom of England, but this was the first and last time a castle would stand on this coastline in one piece. Exactly how long the castle was occupied for is unknown, but it is known that it wasn't sold or passed into anyone else's ownership.

There is a myth which surrounds the castle which tells of this as being the place of conception for for legendry king Arthur. The tale goes that the neighbouring power, King Uther Pendragon, was hosting a feast one Easter and the Duke of Cornwall and his wife Ygerna attended. The king was smitten with the dukes wife and after the feast had finished demanded her hand. After refusing and returning home to Tintagel, the king besieged the castle in an attempt to capture her, but after being beaten back a number of times realised this was not possible.

He consulted his advisor, Merlin, who cast a spell and gave the king the appearance of Ygernas husband. With his new disguise he managed to get into the castle and spend the night with her, and the story says this is the moment that the legendry King Arthur was conceived.

The castle became a popular tourist attraction during the mid 19th century and is now managed by English Heritage and open to the public all year round.

Tintagel castle stands on top of a coastal cliff, and sitting on the water line at high tide is a dark cave said to be haunted by the ghost of non other than the legends sorcerer, Merlin.

Since the castle is associated with the legend of King Arthur, it is not suprising that claims of ghosts here are related to it. The claims themselves are sketchy at best and include stories of everything from his full apparition to a huge glowing white light beaming out of the cave.

These stories are as bold as they are unlikely, but tales of something residing in the cave persist non the less. Who or what this thing may be and why its there is something that will forever be lost, but i must advise that you DO NOT visit the cave to see for yourself, as it sits at the foot of a long cliff line and gets cut off at high tide, making it very dangerous.

As for tales around the castle itself there isn't really much information about ghosts there, though people do seem to frequently capture all kinds of orbs, especially in the areas within where to rooms once stood.