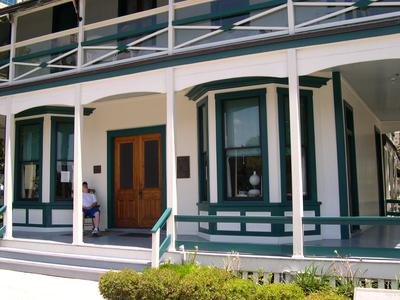 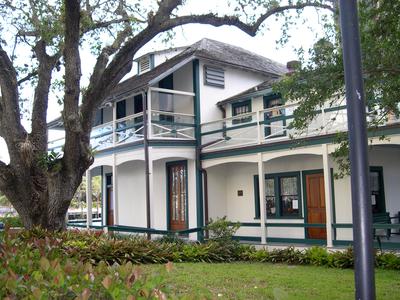 Side entrance of the Stranahan House

This house was first constructed in the 1890's by Frank Stranahan as Ferry Boat Station and a Trading Post. He fell in love with Fort Lauderdale's First School Teacher, Ivy Julia Cromartie who came to Fort Lauderdale to teach 9 students, with more to follow. In 1901, they decided to get married, she was 19, he was 35, which was quite common but she was forced out of being a teacher. Married woman were not permitted to be teacher because of the explanation of a "Baby Bump" that might occur in Married Women. Although she was not allowed to teach "White" children she did teach Native Americans and African Americans. Hence our first ghost.

Haunting #1
August 3rd, 1903 a young Seminole girl knocked on Ivy's door. The girl was out of breath, sweating and eyes rolling. She told the girl to come into the house and she would get her some water, but it was too late, the 7 year old girl expired in the threshold of the door-well.

It now the site of a couple of entertaining haunting. She plays hide and go seek with an expensive Mourner's Hat from the Victorian Period. She also likes to steal candy for the big glass jars on the desk of Frank. The lids pop off and the candy goes missing till the caretaker of the house goes into the attic. The candy is stacked in the window sill of dormer window.

There is 5 more ghosts that roam inside. I was the official paranormal researcher from 2001 to 2009.