The Monks of Lilleshall 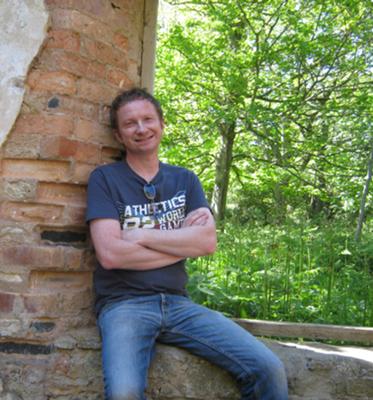 The monks of Lilleshall

The beautiful ruins of Lilleshall Abbey sit lonely and unheralded at the end of a farm track, tucked away in an unexpected, sleepy corner of the Shropshire countryside. The decaying walls of the Abbey are shielded from the nearby road by a line of trees and feel distinctly isolated and sheltered from the outside world.

Stand at the centre of this imposing structure and breathe in the atmosphere; touch the cold, lichen-covered walls and journey through time to a darker, less enlightened age.
It was a miserable day to arrive at Lilleshall: the sky was a thick mass of angry cloud; the wind had whipped up and drove channels through the grassway; and the rain was beating heavily, running as fierce torrents across the ancient grey stone. I had parked the car in a neighbouring lay-by, just in case the approach proved too small and busy; why I don’t know – anyone else would have turned back in this weather. But rain or shine I had made the commitment to visit Lilleshall several days earlier; and as anyone who knows me will testify, once entered into my notebook only death or disaster would see me change my plans.

I walked up and stopped central to one of the walls; my eyes immediately drawn to the beautiful arches that soared across the distinctive red sandstone wall, rising and falling above huge glassless windows. But it wasn’t enough for me to just see; the desire to run my hands across the centuries was too strong. I clasped the sodden stone, letting the rivulets form rippling pools around my fingers; my breathing quickened and all at once I was overcome by an intense emotion; an indescribable connection; a sense of oneness with the ancient edifice.

The feeling took me aback. I had put the abbey at the very top of my list of places to visit in Shropshire and had high expectations, but nothing like this. Yes, you could say that many of my visits to ancient monuments resulted in something akin to spiritual – no, not spiritual, it was much more subtle than that; more a bridge across time connecting me to the past; a palpable sense of the religious fervour that must have accompanied the build. You see, I had always placed importance on leaving a place with more than a set of photographs and notes. I wanted something which could not be expressed in words.

I must have been pressing the walls with considerable force for my fingers had become numb. But it wasn’t a typical pins and needles numb, more a disembodied sensation, almost as if they were no longer my own. I placed my hands in the pockets of my coat and rubbed them back and forth against the fleecy lining attempting to warm them.

Moving away from the wall something caught my attention. Amongst the tiny towers of rock trailing away to my left, foundation stones long since lost and discarded, I was aware of a presence, a body breaking up the light streaming through the archway. Turning slowly on the spot, I could see a motionless shape outlined on the lit patch of grass. A tightening sensation engulfed my throat and my palate dried. Not a sound could be heard apart from the splashing of rain against the abbey stone. Yet I was quite certain a figure was hovering close by, still and silent, listening.
I stared at the shadow with a motionless gaze for what seemed an age, enough time to conclude that it as the outline of a cloaked figure. But why did it hover so? The skin across, my arms and shoulders tightened and prickled; my breathing slowed to a painful draw. And then, suddenly, a flood of light obliterated the opaque shape and it was gone; the grass unmasked and returned to green. Again, no sound could be detected but I was certain that the hooded entity was on the move, a short distance behind the wall.

Trembling I sped to the end and clasped the jutting stone. It was an effort to steady my nerves, but I did so, enough to brave moving, to see around to the back of the wall. There, against the dim light I could see a figure clad in brown cloth, hooded, crossing the grass and littered stone, disappearing through a darkened archway. My immediate thought was to leave well alone and exit the grounds – I pictured myself running to the car, slamming the doors and speeding away. But despite the intensity of the desire to abandon the place, my curiosity was piqued – I invented something earthly and rational to comfort me as I headed to the archway a short distance ahead.

The entrance was shrouded in filmy sheets of rain; little could be seen beyond the soaring arch, just a faint glimmer at the centre of the hollow. I inched into the darkness and waited for my eyes to adjust, questioning my motives for pursuing the figure. A chill enveloped my frame; this was fear in its purest form, restricting my steps along the passage to a slothful and leaden pace. With arms outstretched I slid my palms against the opposing walls and stepped further, shuffling along the passage to the half-light streaking the far end.

The corridor led me out into a large open space, sprinkled with stony mounds and overgrown tufts of grass. The rough rectangle was bordered by fragments of decaying walls, the fabric I’d become accustomed to; but this was a place I immediately recognised. No doubt it was from the book I had read before journeying to Lilleshall but I was suddenly struck with an overwhelming feeling there was something dreadful lurking here. I crossed the expanse and all at once it came to me – this is the Abbot’s Hall; it leads to his chamber.

And that’s when it started: a violent shifting of the rock beneath my feet; a huge thunderous applause from deep within the earth; followed by sudden silence, a quietening unearthly in nature. My head throbbed and a wave of nausea overcame me. Then it happened again, as angry as the first. The third came; I lurched forward and ran with urgent stride to the doorway west of the Hall. It was here, in this ghastly chamber that I saw the figure once more.

Candles illuminated his hunched frame, nestled at the lowest step of the altar. From this distance I could make out some movement in the cowled shadow. The shoulders were moving back and forth and with each lunge forward a hideous cracking sound could be heard. I pushed my weakened torso forward towards the altar and there the full horror was revealed. The robed figure held another in its feverish grasp, squeezing and constricting the victim’s sinewy neck; his tightening throat delivering pathetic yelps as the head was bent backwards, striking against the stone. Under pressure, his blood spurted and rained over the murderer. The abhorrent embrace of the two shades cast a flickering shadow against the walls of the chamber.

Without thinking I threw my weight at the kneeling assassin, throwing him off balance, crushing his frame into the ground. The cloaked figure twitched and spasmed, tossing his head to one side. With slipped hood I could see the face, tight grey needle-thin skin stretched over bruised bone, slipping into darkness. Was this death? And no longer the other at his side; vanished without trace.
I left the scene and stumbled through arch and passageway back to the car, knowing that what I had seen was of the past; a ripple of evil reaching forth through time. In some way it felt like my past, but beyond that suspicion I did not understand.

My story is told, and ends with this: A week after the abomination, I returned to the book that had started this journey. I probed further and there in the final chapter was my epiphany: it was details of a decade old excavation, under the chamber where I had witnessed the duelling apparitions; a large stone slab was raised and beneath it was an unmarked grave. It was old bones laid in a shallow hole near to where the Abbot’s private altar would have been. All attempts to identify the victim had failed; as too the cause of its demise. Was it the Abbot? Only one expert had offered a suggestion, but strangling was never confirmed. And there was an aspect of the find that had the experts troubled: a fragment of cloth between the bones of the fingers that could only have come from a contemporary garment. The book slipped out of my hand as I dashed upstairs.