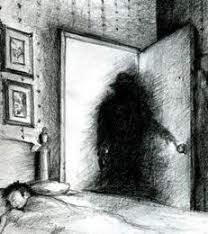 Then, about a week later, my friend stayed over again. This time, she was the one who had the experience. She awakened at 3:00 am to the sound of an earsplitting scream and what sounded like either someone running or falling down the stairs. She didn’t sleep the rest of that night. When she told my sister and me what had happened, I asked her if she was sure she wasn’t dreaming. She told me that she was sure because she woke up at the start of the scream and way wide-awake by the time it had ended and the tumbling/ stomping began. No one else in my house had heard it because we are all either extremely heavy sleepers, or in my mom’s case, Taking powerful sleep aides.

The third time I heard that voice that had become all too familiar was towards the end of last year. I was home alone (my parents and sister had gone shopping somewhere) and I was in the bathroom. I had just finished washing my hands when I heard footsteps the hallway. I got as far from the door as I could and waited about ten minutes for it to stop. When it did, I ran out of there and into my room as fast as I could. On my way there I heard that horrid voice; I couldn’t make out what it said because I was running so fast. I stayed in my room until everyone came back.
I went a while without chronicling what happened after that incident, so it’s likely that I am missing some things that happened. The farthest back I can remember on my own was a few months ago (It is currently June.) when my parents went to Wendover for the weekend, leaving me (now seventeen) and my sister (now thirteen) alone in the house. We had expected to have all hell break loose, but surprisingly, it didn’t. All that happened was some shuffling around downstairs. Then, in the month of May, my family and I left for a week for a vacation. The night we got back, I heard the same shuffling, only this time it was right outside my door. I was exhausted from the long car ride home, so I just turned over and cranked my iPod up so I wouldn’t hear it; I was not in the mood to deal with this crap already. This seems to have made it mad because no more than a few days after, my sister, who had gone into her room to get something, came running down the stairs and told me that a bunch of her little, brightly colored bobble-head animal figurines had flipped over and/or switched places right in front of her, indicating that this thing was either getting more powerful and the sage no longer effects it, or the effects of the sage have weakened with time; I hope it is the latter of the two because that can be easily fixed by saging the rooms again. This thing will not be ignored. Then, around three in the morning a few nights ago, (real surprise on the timing, huh? A lot of this crap happens around 3am.) something was banging hard on a wall downstairs for nearly an hour strait. Again, my parents were asleep, so they heard nothing.
(This is all I have typed up for now. So, the rest will be continued after I have had a chance to do a rough draft using office word)