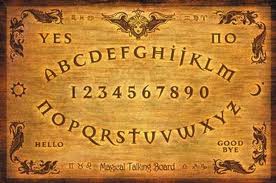 (I've posted a short version of this story before, but decided that I wanted to add more detail more parts will be added as more things happen.)

The house that I have lived in my entire life, the house I still live in, has become a place that I have truly come to fear. This house is not the kind one would normally think of when they think “haunted house” in that it isn’t an old house (it’s only about twenty years old), no other family has ever lived in it before my family, and no tragedy has ever taken place here. So, it doesn’t seem like it would be haunted, like it could be haunted, but something is here.

I don’t know what this thing is, what it wants, or why it even came here in the first place; all I know is that it’s here, and I don’t see it leaving anytime soon. I’m pretty sure the problem stems from an Ouija board my father bought for my mother about six years ago for Christmas; she’d always wanted one because she thought they were cool. At the time, I hadn’t heard any believable stories about anything bad happening because of one of these boards and I really only had a vague idea of what it was supposed to do, but I got a bad feeling when the board was brought into the house. I told them to get rid of it right then, but they didn’t. A few months later, my mom, my aunt, my dad, and my sister decided to “play” with the board. I cried and begged them not to mess with it, to just get rid of it, but my desperate pleas were ignored. After all, what adult would listen to what an eleven year old has to say? I stayed in my room while they played with the board and refused to come down the entire night.
After they finished, my sister came into my room and excitedly told me about the whole thing. From what I was able to gather, it was just your normal Ouija board story; ask it some mundane question, freak out as the planchette moves, accuse the other participants of moving it themselves, and everyone laughs. No harm done, right? Wrong! Shortly after, my sister had one of her friends stay over. They were in my sister’s room about to go to sleep, when they suddenly ran screaming from the room and refused to go back in; they ended up sleeping in my room with me. The next morning, they told us that they had seen a figure of a tall, lean man with some sort of wide-brimmed hat. The figure had no features, it was just a solid, black mass; we latter found out that these types of figures are known as “Shadow People”, and that particular figure has been seen in other locations as well . Of course, it was dismissed as two children with overactive imaginations. I too dismissed their claims and laughed it off. (to be continued)