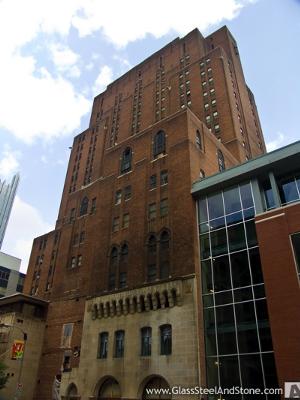 First of all, let me say that I am a Cinema student at Point Park and the school is DEFINITELY haunted.

I live on the 11th floor of Lawrence Hall, which is supposed to be haunted. I can verify that it is haunted, because of the experiences that I have had in the room.

I have a lot of "energy" and belief in the paranormal, which is why I believe that I get more activity than most other people here at Point Park. Since I have been here, I've experienced the things that people have described on the internet about the "Lawrence Hall Shuffler."

Some of the experienced activity includes (but is not limited to):

- Objects moving themselves to random locations around the room, and objects in my desk ending up in drawers that I don't keep them in.

- Fans keep turning on and off, mostly when I am out of the room but I had one incident where my roommate and I were present in the room.

- Bumping and moving around in the closet, I have also heard people talking. When I investigated where the voices were coming from I couldn't find a source, they seemed to be loudest near the closet. I have also been alone in my room when the closet doors burst open.

- The bathroom light sometimes likes to turn itself on after I flip the switch to off and step out of the bathroom. Also, objects have fallen in the bathroom when I've been sitting in bed on my computer.

- I've walked out of my room and turned the lights off, locking the door behind me. I'll walk down the hall, talk to a few people and then walk back. When I unlock and open my door the lights will be turned back on.

- The door sometimes likes to lock itself on me. I'll unlock the door when I go down the hall, but keep it closed, and I'll go to open it again and it will be locked.


These are just a few experiences that I have had in this room. I sometimes get scared by these experiences, even though I'm into the paranormal, but the ghosts are harmless.

There are a few rumors about this school:

1. A girl on the 10th floor was smoking in her room and started a fire, she burned to death. This may or may not be true. Most times this legend is told people like to say that the room she was in is fire-damaged and unusable and no matter how many times people have painted over it the charcoal comes back. This is not true. I just took a trip down the the 10th floor not even 30 minutes ago and every room is in use. There is a possibility that a girl has died on this floor, as people die all the time, but there is no fire-damaged room and all the rooms on that floor are currently in use.

2. A legend goes that Thayer Hall, which is connected to Lawrence through a skybridge, used to be a mental hospital. This IS true. The building is designed like an old-style mental hospital was and the elevator does not go to the 6th floor. This is the floor that the patients were held on.

Also, a children's school used to be held on the 3rd and 4th floors of that building. What is strange is that, years after the school doesn't have children, there are still children's toys on both of these floors. During an investigation Halloween night, some friends and I went on one of these floors. There are cradles, toys, and other misc. things thrown about down there. Check it out for yourself.