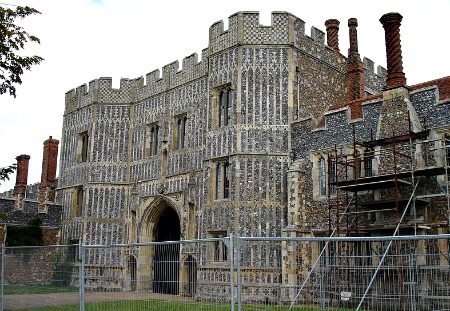 St Osyth Priory is thought to have been built during the 12th century and it was named after St Osyth, a saint and Anglian princess, and was quite isolated since at the time the village of St Osyth was located half way between the church and the river. An episode of "Time Team" shown on Channel 4 filmed here found that the village was present in the area around the church no sooner than the 14th century.

The priory was an important building in its day, with it being owned by royalty and lords alike, with its fine decorative flint work on the exterior. But for all its influence and hundreds of years of being in the hands of powerful owners, it seems that the thing its most well known for is its involvement in the St Osyth witch trials of the 16th and 17th centuries, were it was thought to be the centre point for the trials were 10 local women were hung as a result.

The priory has been open to the public in the past but if you wish to go inside please contact the venue directly to ensure the possibility of entry.

As you may have guessed the main ghost thought to be haunting St Osyth priory is the ghost of St Osyth herself. There are various tales which surrond St Osyth and other saints which were often exagurated to portray how holy they were. One of these tales says how she actually drowned in a nearby stream, and after 3 days of nuns praying for her she miraculously came back to life.

Tales like this to me are nothing but tales, but her death was supposedly witnessed by many people and the surviving tale is the foundation for the modern ghost story of the priory's main ghostly inhabitant.

At the end of her life she was executed by beheading, but legend says that where she fell a spring burst forth from the ground. She then proceeded to stand, pick up her head and walk to the door of the nunnery, were she knocked on the door 3 times before finnaly collapsing dead.

Her apparition is said to be seen walking around the grounds of the priory holding her head under her arm. Also people who have been in or near the church have reported hearing knocking sounds coming from the other sides of doors when the area is known to be empty. She is said to appear quite vividly on a certain night of the year, thought to be the annerversary of her execution, but since no one seems to know a date for this it indicates that this may be just a hype tale, but having said that people still seem to report seeing her.

As for other ghosts at the priory people have claimed to have seen the apparitions of monks walking the grounds holding candles, with one in particular being dressed all in white and appearing more often than the rest.

The spirits of witchs are also thought to haunt the area, though this story often pops up anywere witch trials took place. During the 16th and 17th centuries a total of 10 local women were hanged here for their supposed part in practising witchcraft.

In 1921, 2 skeletons, both belonging to women were found in the garden of a house in the village, with one of the skeletons thought to belong to Ursley Kempe who was the first witch to be executed during the trials. They became a local tourist attraction at the time for a few years after they were found.