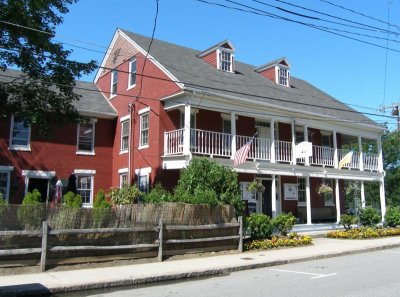 i am a local to Ashland and my mother and i were doing real estate in john stones.

we just had gotten breakfast and we headed for the old building. once meeting the client we headed inside. the first place we went to was the second floor and we showed him how nicely the tables were setup how much space the 2nd floor occupied.

there is some history on the basement: well were not sure but after doing some research the basement had using during the whole underground railroad and helping the slaves being freed.

later on in the 1980 the town was doing some piping and they stumbled upon a hidden door in the basement where the found a old coat and some ale bottles dating back to 1861.

alright back to the story so after leaving the basement(nothing out of the ordinary happened we headed for the attic.

ow another brief history story was that a little girl was hit by a train right next to john stones carried into the attic where she soon pasted. now as legend served there was a bloody dress left in the attic which after doing the real estate job we discovered was true.

so anyhow once we proceeded into the attic we tried to stay as far away from the horrible smelling dress.

so i was standing on the opposite side of the attic when i looked over to the client and he had the goofiest look on his face. once i turned back to my observation of the wall i heard a little eerie voice but i was unable to hear it the first time.

then i felt something feel my pocket and i turned around to discover nothing was there. so i walked back over to my mother and the client completely freaked out and said can we please leave now. and my mother said why and i had told her what happened so we had started to walk out of the attic when the client was tripped and his head hit the supporting beam and he layed atleast 3 inches from the stained dress.

so after helping him up he said what the **** was that? so then we left and he never ended up buying the place. so now the same owner still resides there.