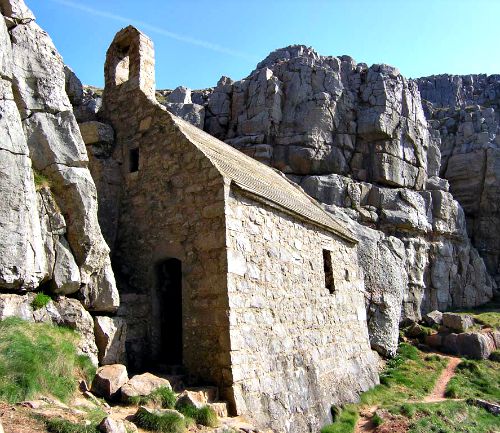 The legend of St Govans Chapel

St Govans chapel is a small stone chapel situated in the Pembrokeshire coast national park on what is today known as St Govans Head.


The actual building itself was built sometime during the 14th century by a man named Govan, who is thought to be one of three people. The first is that of a humble abbot who came from Ireland seeking the man who trained him, who just so happened to be St David. The next identifies him as Gawain, who was one of King Arthurs knights of the round table, moving to the area late in life to escape something in his past. The last story identifies him as a simple thief, but whatever the reason he came here and whoever he was, it doesn't make any difference to the story.


He came to the area, for some reason and found shelter in a deep crack in the cliff and stayed there for a while, surviving on fishing and getting fresh water from two springs, both of which have now dried up. While staying by the coast he came across some pirates, who robbed him and took all he had, leaving him with nothing on the waters edge.


In his shame of losing everything he had, he decided to remain on the coast to spite the pirate by warning everyone of there presence, which he did by sounding a silver bell. Where he got this bell is unknown, but after the pirates realized he had a large piece of silver in the chapels tower, they came back and robbed it from him.


After they left Govan prayed to god to help him, and the legend states that angels were sent down who recovered the bell from the pirates.


To make sure the bell wasn't lost again the angels encased it in a large rock by the water edge, and when Govan were to hit the rock it would sound with a perfect tone 1,000 times louder than it was before. This rock is still in place today and inventively named "bell rock". 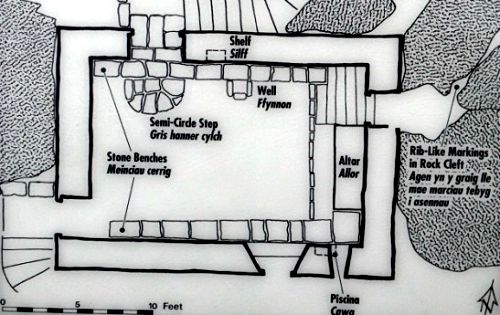 Above you can see a map of St Govans chapel, with the steps on the right leading to the small cave he started out in.


He remained in the chapel all his life and after he died the locals buried his bones under the alter which is still in place today. Whether this is true of not is unknown as no one has opened up "bell rock" or excavated underneath the alter. But it was customary to bury the bodies of the chapels priests underneath the altar, as this practise was spread across all of England for hundreds of years.


One of the springs that Govan took his water from became a holy well after his death, with the locals believing it to have healing properties, and many would come here to be cured of their illness's.


One last note about the cave is that there is supposed to be an imprint of his hands in the floor of the cave, though since I have never been there I cannot confirm this, but if its true the legend behind it is unknown.

As you may have guessed the main spirit at St Govans Chapel is that of Govan himself, with no reports of any other spirits here.


But he doesn't seem to ever make himself known in any direct way, but more subtle signs such as intense temperature drops inside the main room, or a faint glow coming out of the windows when its known to be empty.


As for the legends, the bell rock has never been disproved, since its never been cracked open to see if there really is a silver bell inside. It goes without saying that the rock does not sound whenever anyone else strikes it, as its use was granted solely to Govan by the angels.