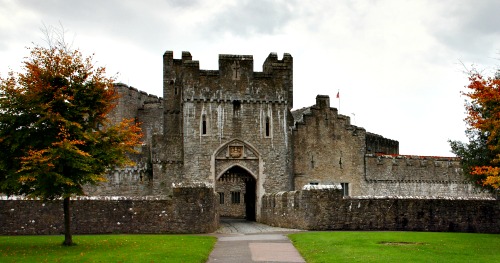 The oldest parts of St Donats castle were built in the 12th century by the De Hawey family, though the only surviving parts left are the keep and what is now the inner curtain wall.


The castle was passed into the ownership of the Stradling family in 1298 with the marriage of Sir Peter Stradling to Joan de Hawey. The new owners spent a fortune expanding the castle and added many features including the outer gatehouse and curtain wall in 1300, as well as making the keep larger, with the inner court being built some 200 years later.


The Stradling's managed to hold onto the castle until the death of Sir Thomas Stradling in 1738, when ownership passed to Sir John Tyrwhitt. This was not to be used as his main residence and the castle began to fall in disrepair.


It wasn't until the year 1925 when a man named William Hearst bought it after seeing photos of it in country life magazine. He spent a huge amount of money turning the castle back into its former self but due to economic reasons put the castle up for sale again in the late 1930's.


After being used by British and American troops during the war it was finally bought again in 1962 by Monsieur Antonin Besse II, and given to the Governing Body of Atlantic College. Today it still functions as an international college but is also open to the public for general viewing.

There are believed to be several ghosts that haunt St Donats castle, with the most well known being that of Lady Stradling herself. The story goes that she was murdered in the castle and when her apparition is seen it is a sign of a death soon to come in the Stradling family.


She is the most well known ghost here and people have claimed to have seen her apparition but if the legend is true then it seems there is no reason for her to ever appear again. However those who claim to have seen her apparition here describe it as wearing a long flowing dress with high heeled shoes, and she has most commonly been reported in the Long Gallery area.


As for other spirits it is unknown exactly who they are or why they haunt here, but consistent stories of their sightings continue. An apparition of "Witch" like appearance has been reported on a number of occasions in the armoury, and a phantom piano player likes to make themself known when no one is in the room.


Apart from this there are the usual orbs and strange mists seen only on camera, but also an interesting claim about a phantom panther like creature which has been witnessed in one particular corridor.