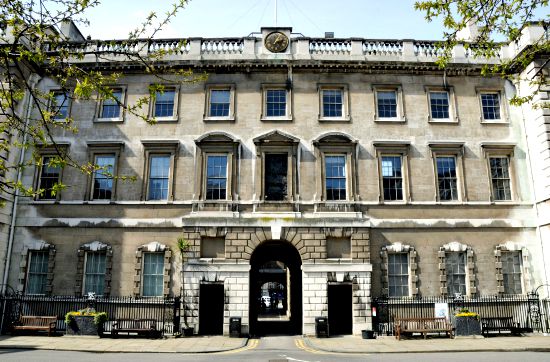 St Bartholomews hospital is the oldest standing hospital in Europe, founded in 1123 by a man named Rahere, who was a favourite courtier of King Henry I.


Since its so old there was a very good chance that at some point it would have been destroyed or moved or changed function, but the hospital has been through some of the worst times in British history and survived, though not unscathed.


During the Desolation of the Monasteries it lost its income and fell into a bad state, but was refounded by King Henry VIII in December of 1546 and from that point on became a hospital to the Corporation of London.


Since the site is so old many of the buildings had to be rebuilt over the years, though always in their original spot. Today most of the buildings which can be seen were built around the 1730's by James Gibbs, who was one of Britain's most influential architects.


The hospital got its current name when it became part of the NHS in 1948 and today is still open and treating people.

There simply couldn't be a building this old in a country such as England without it having a good few ghost stories attached to it, but since countless people would have died in this building it certainly has a good enough reason to be haunted.


There are of course all of the usual stories about things such as apparitions and strange sounds, but the most well known story of the hospital is of its haunted lift.


There is a lift within the building that functions as and other lift does, but it is within this small metal box that a nurse was murdered many years ago when taking a mentally unstable patient between wards.


She is only believed to be the reason behind the lifts strange activity since no one has actually seen her apparition, but its thought to be the most likely cause.


Sometimes when people enter the lift and press the button for their floor, it will instead travel down to the basement, were it will appear to be stuck and the lights in the room will turn off. The gate can always be opened though and when the slightly freaked out staff make their way through the darkened room and back up to the door, the lights come back on and the lift doors close and it travels back to the ground floor again, appearing to be working as normal.


The lift has been inspected in the past to find out why this keeps happening, but no faults are ever found.