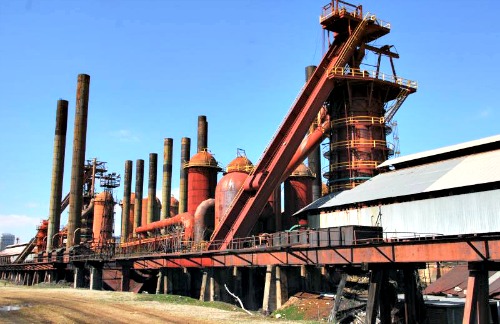 Sloss Furnace is the only blast furnace in the U.S to be preserved and opened for public use. It is currently a museum and holds various functions such as a nationally recognised metal arts centre, a barbecue cookoff and various stage shows and concerts. Today the furnace is a fun and memorable place to visit, but its history didn't tell quite the same tale.


A man named James Withers Sloss started his own furnace company and built the Sloss facility on 50 acres of land which was donated by Elyton Land Company for industrial development.


The furnace was a rather advanced structure in its day, and it employed hundreds of workers from the surrounding area to come and operate it. The furnace was a resounding success and in its first year alone produced 24,000 tons of high quality iron, and it even won an award at the southern exposition in 1883.


The furnace continued to operate until 1969 when it was sold to the Jim Walter Corp. who closed it down due to the outdated workings and the availability of cheaper ores from overseas.


The furnace even holds an annual fright night ghost event, but please contact the venue directly for details.

The man who was resposible for construction of Sloss furnace was known as a ruthless buisnessmen, and was often refered to as James "slag" Sloss, and incase you're not sure "slag" is a glass like useless by-product of the smelting process.

Work at the mines was highly sought after, even though everyone was aware of the conditions and risks. At the time there was no government body which protected the rights of the workers here, and knowing this Sloss highered many former slaves on a pityful wage to work long hours in these terrible conditions.

Apart from the workers being incredibly hot and enduring back-breaking work the furnace also claimed many of their lives in the time it was operating. Everything from steam blasts to people falling into vats of molten iron were responsible for the loss of life here, but there is one story of the death of a worker which out shines the others in terms of gruesomeness.

In the furnace there were many large cogs on many of the machines, and one day one of the workers was unlucky enough to catch his clothing in one. He was slowly dragged into the machine screaming for his life until the giant circle of metal crushed him through to the other side. His work mates were all present to witness such a horrible event, and each time the wheel turned there was a little bit less of their former co-worker.

Deaths such as this make an excellent basis for a haunting, and this place has more than enough nasty endings to qualify, but it isnt its history that makes it known for being one of the most haunted places in the state, but the huge amount of activity that goes on here.

Visitors to the site tell of everything from the normal orbs and sounds, to very bold claims about being phsically attacked or full on apparitions of workers writhing around in pain before suddenly vanishing. There are simply to many stories and claims to list here, but the most well known and famous ghost is that of James "slag" Sloss himself.

The story goes that one day he went to the top of the highest blast furnace known as Big Alice and fell into the huge pot of molten iron. Apparently he never went up to the top of that furnace in all his time of running it until that day, and the most popular version is that he was actually pushed in by one of the workers, though no one was charged for his death.

His presence has been making itself known since the early 1900's when  people reported being violently pushed by unseen hands, and there is even a story of how 3 workers were found knocked out in a store room, though they couldnt say how it happened.