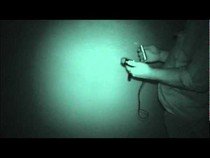 Ghost Trapper, a paranormal research group from the Sierra Vista/Palominas area, recently investigated the old Caretto House located at 47B OK Street in Bisbee, Arizona. This Brewery Gulch abode was built circa 1904 by one Nicolas Zuik, purchased that same year by John Caretto, and at some point used as a boarding house. The Caretto house is one of the only surviving structures of the 1907 Chihuahua Hill fire.

The Ghost Trapper investigation of the Caretto House took place on June 11th, 2011. The current owners were kind enough to allow full access to the house, but warned of mischievous apparitions, rocking and knocking, and of the many voices that are constantly whispering from the beyond. I was lucky to be included as a guest investigator, and I was looking forward to any encounter that we might experience during our ghost hunt.

The goal of Ghost Trapper is to debunk beyond the shadow of a doubt any potential evidence that is collected from each and every investigation conducted. I like to call this "Debunk the Junk". Although the video files didn't contain any evidence, the audio files were absolutely amazing. Ghost Trapper verified over forty EVP's (electronic voice phenomena) from the Caretto House. The Ghost Trapper team had a couple of personal experiences during the investigation as well, which is always a nice addition.

I'm told there may be a second investigation of the Caretto House, but a date has not been determined as of yet. The Ghost Trapper team is excited about the massive collection of EVP's, but they are seeking the ever so elusive video or photo evidence that a second investigation could possibly yield. Brewery Gulch has a reputation of being haunted, as well as the town of Bisbee, and Ghost Trapper added validity to that claim with their Caretto House adventure.