Red Coat Soldiers ..A True Story As I Lived It .. 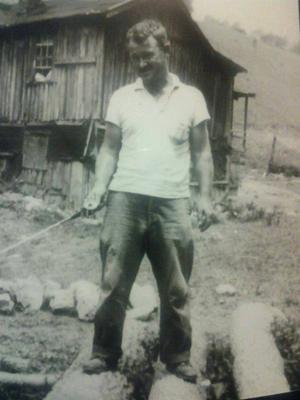 Well..It all begin when I was about 15 years old..We were a family of five girls and of course our mom and dad..Dad was a brick layer which was seasonal work and mom stayed home to help take care of us girls..Except she was sick a lot,,So us girls did most of the house work..cooking and cleaning..We lived in an old house that only had three small rooms..The house was built out of saw mill lumber..It had two porches on the front of it that you walked across before you got to the front door..Then once through the door you entered the kitchen..Turn right and you came into mom and dads bedroom and then turn right into our bedroom..We had two beds side by side..The old iron stead beds with only slats and mattresses on them..We had a door leading you back out on the first porch..A path came from the yard up to the front porch..It started as mom was canning some blackberries that day..I had one sister (phyllis) that lacked nine days being a year older than me..And The other three were younger than me..The youngest (Deloris) was the baby..And (Angela) was a toddler ..Both of them still in diapers..And my middle sister Retta..Me and my older sister Phyllis took care of Angela and Deloris..But that day mom told Phyllis to wash the canning jars..I had fixed Deloris a bottle of milk..then we went out on the front porch to an old rocking chair (built out of old lumber) and it had a board gone off of the seat..I was short so I would stick my leg down through the hole as to be able to rock the chair..It was a nice sunny day..No clouds in the sky..And if you sat in that chair and look straight ahead you could see our neighbors pasture field.It had a hill going up that lined the sky and a dip in front of it..If you came down the hill to the bottom..There was an old right of way road..and a gate between our house and his pasture field.That day as I was rocking and singing my sister to sleep as I looked up on top of the hill of the pasture I saw a Red Coat Soldier just standing up there. I stopped rocking as I watched..He had the red uniform with the white stripe across the front of his coat..He had his hand above his eyes to block out the sun and he was looking left and right..Then he turned and made a come on motion with his hand to something or someone behind him..Then I saw a horse come up to where the soldier stood..and it was the prettiest horse that I had ever saw in my life..It was a roan horse with a bald face..But it was beautiful..And on top of the horse sat another Red Coat Soldier..But he must of been a General..Anyway he was an important officer or I took it to be..They sat and stood there a brief moment looking around..Then the soldier walking took something from the officer and walked down to a bush on that hill and put it under the bush,They went on down the hill.They were ghost.But a ghost came back the next night..I had gone to bed that night and I heard something that sound like horse hoofs clopping in front of that front porch..Then I heard someones footsteps come across those two porches and someone came and stood by my bed.And I was scared..I covered my head too scared to see who it was..All I could do was to pray it would just go away..Please go away..It turned and left the room and house..But it didnt end at that..About every night it would come back..and I would pray..And it would leave.Still had not ended..I turned 17 and got married,,left home..But that ghost followed me..One night me and my husband had gone to bed..My husband was lying on his stomach partially asleep I guess..I was lying awake..And I heard the ghost walking to our bed..It came up and stopped beside the bed..I did not know it right then..But my husband was awake enough so that he took his fist and slung out his fist letting his arm back down against the bed and then my husband went on to sleep. So did I..The next day..he admitted to feeling something standing by the bed.But the ghost left and stopped coming back..And No..Our neighbor had a mean Bull in the pasture so..No..I never went to see what might have been put under that bush..I decided it was best left alone..My cousin wanted me to go check it out and I said no way..And..Yes this is a true ghost siting..Picture of house we lived in pictured behind my dad..