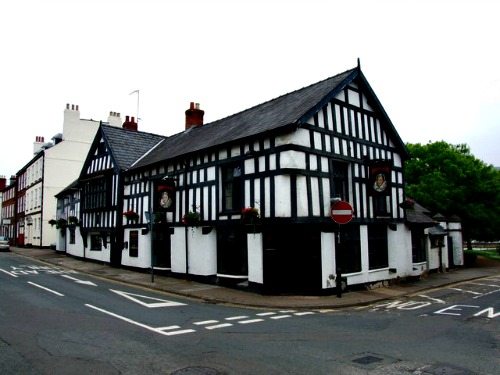 The exact age of the Queens head is unknown, but it is thought that the building was completed in the late 1500's. It has seen many changes and additions in its life, with the plaster work ceiling being added in the 17th century and the bar itself being changed many times, with all the original stone work being either removed or covered up with more recent features.

The pub was built with some interestingly placed hiding spots, such as removable floor boards leading into tiny 1 man hiding rooms, and secret removable pieces of wall. Why the building was made with so many secret hiding places is unknown, but there must have been a purpose for it at the time of the pubs construction.

The pub has been a grade II listed building since 27th June 1952, and in 2005 it became a community pub, when a group of local business people, with the intention of making it a more welcoming place for all renovated the establishment. Live music was introduced and even a small library was opened, but this may have not been such a success as only 1 of the original members of this group is still involved with the pub.

Is the Queens Head Haunted?

The most well known story attached to the Queens head is the assassination attempt on Oliver Cromwell. He was known to stay at the pub on many occasions, using it as a preferred resting place whenever he was in the area. On one such visit he was in the bar area one night and a member of the opposing forces, the cavaliers, entered the pub through one of the secret passages and made it into the bar area. He attempted to shoot Cromwell but missed and in his attempt to flee was killed by one of Cromwell's guards, dying right behind the bar.

Its no surprise that with such a well known story attached to the pub that this would create a tale or 2 about the possible identity of the ghost which is often seen in the bar area. People who have claimed to have seen this spirit say that he is often seen wearing the cavalier uniform and standing in the area behind the bar where he is believed to have died. Who he is exactly is unknown since he is probably "just another soldier", but his spirit lives on (ish) behind the bar.

As for other ghosts which reside on the premises there is thought to be quite a few, and the pub claims to be the 3rd most haunted in all of Wales. Who these ghosts are or why they are there will forever remain a mystery, but there are some in the mix which like to make themselves known as often as possible.

One of these spirits is that of a young girl, who has been described as having long blonde hair and always wearing a flowery dress. She has been seen standing in the lounge area and one guest even claimed to have seen her standing at the foot of his bed when he woke up in the night.

Apart from the cavalier and young girl the other spirits only seem to make themselves known in their deeds, which involve such things as messing with electrical equipment and moving objects in the bar area, especially after closing time.