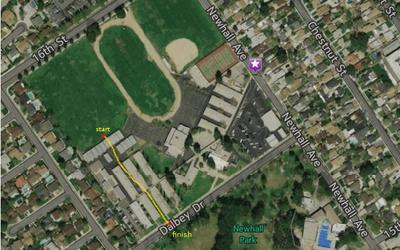 An aerial view of PJHS

Across the street from Hart Park in Newhall, CA, there is a school that hasn't been around for too long...but might be familiar to those who've been there after hours. My roommate (at the time) and i used to walk around the neighborhoods late, just having a good time. Several times we would sneak in the school between 1am and 3am on the weekends. It is literally pitch black, no janitor at 1 in the morning...however we would hear heavy boot steps on the blacktop, keys jingle, and faintly sounding closed doors...just too hard to rationalize there at such a late hour.

There was one time though, we decided to walk, beginning from the back, behind the bungalows and the field, (our only light source)through the outdoor cafeteria to a brick wall that is the front side of the school. As we proceeded to the front of the school, I began to feel some kind of trance. Body and mind started getting tingly, light, and faintly i kept going through the dark. Somehow, i don't know how, the laughter, the noise, the activity that was going on...children, as if there was a lunch or recess. What began as a low and distant noise only grew even louder, the children got louder, the playing, the running. I thought to myself as this was all happening, "i must be nuts! how am i hearing this!?", didn't even bother to respond to my friend as this was going on except when i said to him "we should probably hurry", he agrees and we pick up the pace. As we were approaching to the brick wall, the sound of all the kids ended when a recess bell rang...so strange how hollow yet resonant the sound was of the bell...and we finally reached the wall, and it was over. After that, we proceeded back home. On the way home I tell him about my experience, he looks at me...and shockingly experienced the same noises and feelings as
I did in the school (even the damn bell!). I do believe that there is something about that school, that old red brick building.

Well that was the most powerful experience we had because every other time we went there we just heard the footsteps and the keys (i dare not go back through that again)...there could be someone there, but c'mon a janitor, working at 2am on a saturday? I hope there are other people who've been there because I strongly feel that was not my imagination.