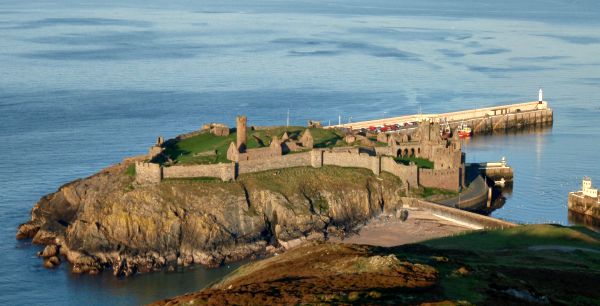 Peel castle was built sometime during the 11th century by a Viking king named Magnus Barefoot. It is the oldest, still standing castle on the isle of Man and one of the finest examples of Viking fortifications anywhere in the UK.


The island did have Celtic forts on it at the time the Vikings arrived, but these were often made of earth and timber, but one exception was the Celtic monastery which stood on St Patricks Isle, which is the small island now completely covered by the castle.


The monastery became integrated in the castles design and now the round tower which can be seen inside the walls was originally part of the monastery, though some alterations have taken place, such as the addition of battlements.


The main surrounding walls and towers were added during the 14th century from local red sandstone. After this date the castle had a relatively boring life as it never really saw any combat. After the Vikings left it was used by the church since it had a reasonably large cathedral within the walls, and construction and maintenance continued as late as 1860.


The reason for the poor state of the interior buildings and towers is from when the Vikings left and the church was in possession. Since it was only used as a holy site and these were probably the safest place to be during medieval times, keeping up maintenance on the defences seems the lowest priority and some of the structures began to crumble. The church only used the site up until the early 1700's when it was totally abandoned..


Today Peel castle is a popular tourist attraction open all year round and even has its image printed on the rear side of an Isle of Man £10 note.

The Ghosts of Peel Castle

Peel Castle has always been closely associated with the tale of King Arthur. In the many texts that refer to him there is an island which comes up again and again called Avalon. This is described as a small fortified island where the famous sword known as Excaliber was forged, it is also the place where Arthur was taken to heal from his wounds after the battle of Camlann.


Of course it can never be proved exactly who Arthur was and when or if he existed, but that hasn't stopped the island becoming well known for mysterious goings on.


There are all the usual tales you may expect from a place like this, such as seeing apparitions of past residents and strange sounds, but the most well known and seemingly the most active spirit here is known as the Moddey Dhoo.


This legend goes back hundreds of years and the origin of which seems untraceable, as does the reason it is here. The Moddey Dhoo is a large black dog like creature, with huge shining eyes. It has been seen relatively frequently over the centuries and there are official records mentioning it. One such account comes from a historian in 1731 and goes as follows:


They say, that an apparition called, in their language, the Mauthe Doog, in the shape of a large black spaniel with curled shaggy hair, was used to haunt Peel Castle; and has been frequently seen in every room, but particularly in the guard-chamber, where, as soon as candles were lighted, it came and lay down before the fire in presence of all the soldiers, who at length, by being so much accustomed to the sight of it, lost great part of the terror they were seized with at its first appearance.


There used to be an underground passage that connected the castle to the apartment of the Captain of the guard, which ran under the church buildings. The Moddey Dhoo was often seen coming out this passage at dusk and returning at dawn, on what has described as a regular basis. There is a tale of one guard who was tasked with locking up the gate to this tunnel at the end of the day and against protocol he went to lock it up alone, wanting to get the day over as soon as possible. But upon reaching the grate covering the tunnel he saw the Moddey Dhoo and collapsed on the spot, he was taken to a room to recover but died 3 days later, without being able to speak a single word about what happened. This is supposedly the incident which caused an order to be made to seal the tunnel and a new one built.