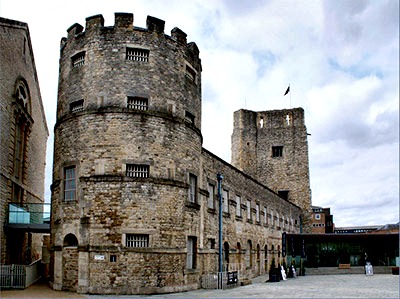 Oxford castle was built by a Norman Baron named Robert D'Oyly between the years of 1071 and 1073. It was built on the orders of William the conqueror who D'Oyly fought with in the invasion of England in 1066, to stand as a symbol of dominance over the town of Oxford.

The original construction would have just been a Motte and bailey fortification but this was soon replaced with stonework's. This new stone fortification played an important part in the civil war of the anarchy in the 1140's and it was during this time that 2 siege mounds were built, one called Jews mount and the other mount Pelham, both of which can still be seen today.

This was the last major conflict the castle saw and after this its military value diminished and the castle became a site of administration for the county, acting primarily as a prison.

During the English civil war the castle was mostly destroyed along with a large portion of the town itself, though it was quickly rebuilt in 1785 and once again began its role as the main prison for Oxford, being expanded again in 1876 after which it was officially known as HM prison Oxford.

The prison closed in 1996 and was redeveloped as a hotel. The medieval remains of the castle are grade I listed buildings and a scheduled monument.

Castles always seem to be haunted, perhaps because of there long and often violent histories, and Oxford castle is no exception. It is believed to be one of the most haunted buildings in all of the UK and in its almost 1000 year long history it has been the site of sieges, executions and murders.

The number of spirits who linger here is unknown, and unlike many other haunted places the various paranormal teams who have visited here cannot seem to agree on a rough number of ghosts, though most estimates seem to place the number of ghostly inhabitants above 20.

One of the spookiest stories comes from one of the castles former security guards. The guards had often claimed to have seen various things at the castle which could not be explained, such as objects being moved when they have returned to them with no one else around to do so, or bangs and even whispers coming from inside empty room, but one such tale stands out from the rest.

One night one of the guards was on patrol around the castle when his dog suddenly stopped and starting growling at the empty space in front of them. A few seconds later 2 shadowy figures formed in front of the guard and as anyone else would have done he turned and ran in the opposite direction. A few days later his dog died suddenly, with him believeing it to be from the shock it experienced from the 2 shadowy visitors.

Another interesting spirit around the castle, if it is indeed a spirit, is seen in the form of a strange white mist which has been seen forming at the bottom of one of the stair cases, only to float to the top and then disappear.

The castle is also home to some poltergeist activity. This has been witnessed most often during the séances which have been held at the castle. The most well known incident was during a séance in the 1970's when poltergeist activity got so bad that the séance had to be called off and a priest was later called in to exorcise the violent spirit.