orbs or bacteria, I believe this are airborne bacteria 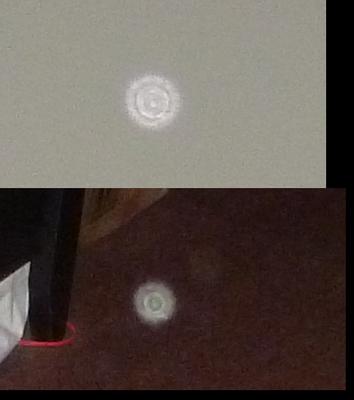 Here and charing my own experience while I was taking picture on the wall on a picture and had made for future electric car.

In my first picture came out good, and than I saw it and start to take more to see if I could get more pictures and yes they were still there and more than one everywhere I took a picture. Than I clean up my camera and they were still there.
Than my wife came home and I told her they were ghost or orbs and they were here to take us and than I thought that this looks like airborn bacteria, .
So we went to the store and bought some lysol to spray everywhere in th house and vacuum the carpet first and while my wife clean I took picutures and they were there and later I spray the lysol and took pictures and they were gone.
So I search the internet for airborne bacteria and yes there are bacteria that looks the same. So I believe we should clean our air a lot more , . However I do not believe in a god or life after we die. Not until I see one real.