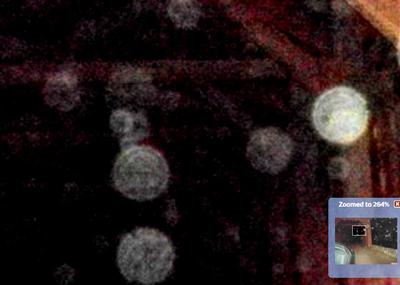 I have studied the Light Breed for a number of years now, They prefer the term Light Breed as opposed to orb. Orb is a general term used for any spherical object. Thats amounts to calling all your friends and family, man, boy, girl person etc...and not using their name. The light Breed can and will leave EVP, and will also communicate through a spirit box. I have asked them in a number of states what do they prefer to be called, their answer is usually, we are the light Breed. Light Breed are the travelers and can be anywhere in a heartbeat, if anyone has heard or studied Quantum Physics, all energy on earth and in the universe is connected like a woven fine fabric.

Here is a test for all the nay sayers out there. The first part is you have to be serious and have some sort of belief in the afterlife.This will not work if you take it all as a joke, remember you are dealing with human energy and emotion in a Light Breed. The walked the Earth in human form just as you and I at some point. They are peoples Moms, Dads, brothers sisters and etc...
Go out after dark with your digital camera and take a few shots, if no Light Breed or maybe just a couple around in your pictures the next step is to call for them, just ask them if they will come to you so you can take a few pictures, then give them a few minutes and start snapping pictures again. If you are sincere, they know if your not because of the energy you give off with your Aura, there will be more and more in your pictures.
The story on orbs being dust is correct, dust will not show up as a round Light Breed or orb, so don't let anyone tell you different. Some of the explanations they have are more far fetched then the Light Breed theory. And all of them have a friend or relative that works for a camera company or the camera manual says its dust. Camera companies are not in the paranormal business and they surely don't want to be in the middle of a dust or Light Breed argument so its in their manual about dust reflection and they remain neutral on the subject.
Another topic from the orb story is moisture, its very true moisture will look like tons of Light Breed, but look closer at them moisture pictures and in a lot of droplets you will see the spirits riding inside them, this is for a couple of reasons, the biggest reason is probably water is a natural lubricant to help them move around more easily, the next is water is one of the 4 basic elements that make up all life here on earth so don't discount them moisture pictures so quick. A light sprinkling of rain gets the best shots, and a hard dew falling makes the worse as far as distinguishing them apart.
One more thing, Make up your own mind when it comes to this topic, do your own test over and over. Don't take anyone's word on a subject then pass it along, that even goes for my opinions. Paranormal don't follow any scientific rules and there are no paranormal facts, only opinions, beliefs and theories so Don't be a conformist, be your own person.