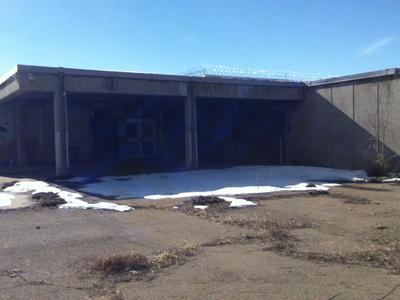 Front of the jail

My dad and I love to explore abandoned places. I heard that there was a jail where we lived that was abandoned. My dad wanted to go because he went there when he was 18 for a DUI. We brought along my cousins we were 14 and my little sister who was 10 at the time. when we got there we had to get in through a window. We all had chills and like someone was following us we found the basement which I regret going in we heard like a conversation we thought the cops came to kick us out but no one was there. It was pitch black also then I felt someone grab my arm I jumped terrified because I was walking behind everyone else everyone looked at me and my dad saw scratches on my arm I wanted to leave same with my dad. Later we found the cell block and was taking pictures in the cells my cousin was pushed out of a cell he was in my dad showed us his cell where he stayed and told us about a friend he made in here that was killed in the jail by another inmate as we walked no one in there one of the cells slammed shut we ran into the court yard just terrified trying to remember where we got in to get out we went back inside and found booking and there was a tomb stone the guy had lived from 1988 to 2011 I don't why I remembered that and then we saw a shadow of a man walking at this point we didn't care about getting caught by police but no one was there we heard footsteps but no one was there we found a way out as we were leaving there was a figure at a window watching us leave. We later did some research and found out that someone was doing statanic stuff in the basement where I was scratched