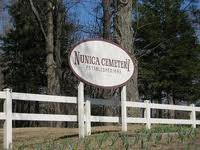 This cemetery is supposedly the most haunted cemetary in Michigan. I've been ther more than once and wouldn't mind doing it again. I have a thing for fear and what happens there. Out of the few times i have been there i have had strange things happen and so have my friends. One night while my friends and i decided we wanted to adventure we found Nunica Cemetary online and decided thats where we had to go. As we pulled up it would give you an erie feeling and it was alot darker back there than it was ouside of it ( let me mind you it was about 1 or 2 o clock.) We got out of the car and begain to walk around we felt as though someone was watching us. My friend at the time kept feeling a sharp pain in his back and shortly after My friend and i split from him and the three others, as we walked down a path close to what looked like a swamp or pond we hear a whistle right by us, we looked at eachother and ran, the whistle got louder and louder and continued to stay right behind us and chased us all the way back to the car.

Another time we went we were dabating on going in and we were standing outside of the cemetary, we heard a faint but loud enough to hear scream and we decided to go in for some reason. I went by myself by this huge tree and when i looked to the left i saw a dark black figure standing there peeking around the tree looking at me so i ran to my friends but didnt tell them because ididnt want to scare them out of the place. The longer we were there the more i saw not just that one but a few dark figures about three really short ones and this tall skinny about 7 foot one. The little ones seemed to glide from tomb stone to tomb stone getting closer to me and you wouldnt see it move, it would just happen to be behind another tomb stone. The Big one stood behind trees peeking at me and i finally told them and we decided to leave and as we left i turned around to take a look at the cemetary and right between the trees the tall black figure waved me good bye and vanished. Now i know this sounds like a load of crap but i know what i saw and i wont forget it. You will choose to believe in what you will.