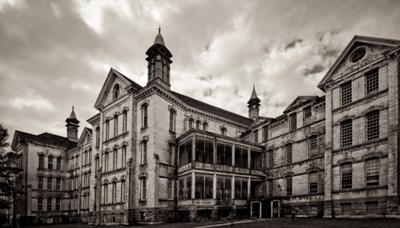 found these pics on Google 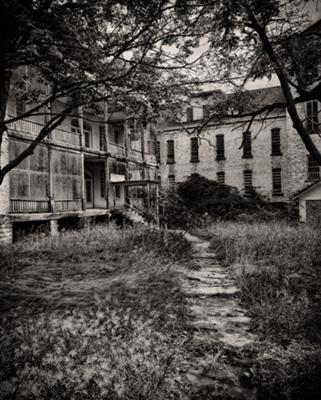 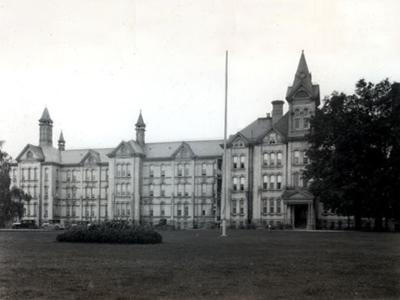 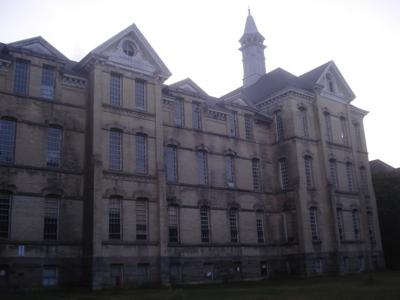 On August 26th 2011, my friends and I were vacationing in Traverse City. Late that night for something to do, we went to the old asylum because it is really eerie. We were hoping for an adrenaline rush. The oldest building has been renovated into condos. The rest of the property is abandoned and falling apart. All the doors are locked and boarded up. It is dangerous to go inside as many of the floors have fallen. The buildings are Victorian. They're gorgeous but very spooky at the same time. While we were walking around in the dark admiring the architecture, each of us had an unsettled feeling. One building in particular (the last one on Silver Dr. on the southern edge of the complex) gave each of us a bad vibe. As we walked to the back of that building, my friends all felt like they didn't want to be any closer to it. Just to be a smart ass, I decided to walk much closer and stare at the 2nd floor windows. My friends slowly made their way next to me and focused on the windows too. Suddenly, I saw something move toward a window, pause for a second, then move toward my left out of sight. The figure seemed to block the light and reflect light, but there were few lights facing the building and none inside. No features or colors were visible. It was strange, like a shadow; but it was definitely the shape of a person. It all happened so quickly. At the same moment, my friend Jessica gasped and said, "uuuhhhhh?!" She then slowly backed away. I continued to stare cuz I just didn't believe my eyes. I also didn't want to believe that Jessica had just seen the same thing. Back at our cabin, we talked about all our encounters/experiences with ghosts. Another friend said, "What about tonight? Did you guys see a figure in the right, 2nd floor window?" Simultaneously, Jessica and I said, "You saw it too?!!!" We then looked at each other and said, "Wait... So you saw it too?!!!" I was like, "That's why you gasped! I didn't want to believe it." We then talked about how it was like a shadow but also blocked/reflected the light, was formless yet had a human outline. We each saw it exactly the same way: It approached the window, paused to "look" at us, then moved to our left!