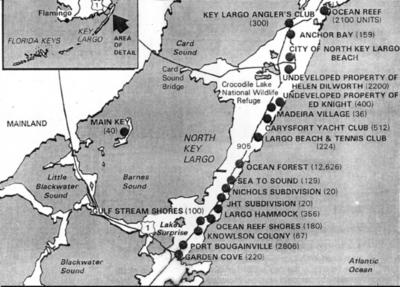 An acquaintance and I have heard of an abandon military station in north Key Largo located on Car Sound road. The military station was used during the 60’s when the United States went to war with Cuba and Russia. Both of us were learning about this significant event in our junior year here at our high school. I was never aware that one of the missile stations was actually sited in Key Largo, the town where I grown up in; In fact I am more or less convinced that my very own history teacher did not recognize this either. How I came about regarding this place had to do with a coworker of mine who happen to go and photographed the abandon military station he said that it seem to be haunted and he got this strange vibe about the area. I got excited about it and planned on visiting it. I put it off for awhile until about 2 weeks ago I went there by myself. I couldn’t believe I even found it since it was hidden in the woods of Key Largo. There was a gate at front that said no trespassing, animal sanctuary; you needed a back county permit to get in. They clearly did not want anyone to enter. I still went on by myself… It took me about 5 minutes to come up to the front gate. The gates weren’t very secure and it was extremely easy to fit through the opening in between the gate. When you walked inside you could tell it was abandon and has not been taken care off. All I can think of is why? This place is a remarkable piece of history. I was not pleased with the way it was left. I cruised around the place and had the guts to walk inside by myself; surprisingly I was not scared at all. The hallways although were a different story and looked like you were walking into your death. I walked slowly until I started to get the feeling that maybe I needed to leave the building now, because whatever or whoever was in there didn’t want me in there. I was anxious to leave but even more anxious to come back. Two days later I brought my very good friend. We walked up to the area together and made our way around the building before entering it. We found more interesting buildings in the back my friend claimed to sense that she felt someone was there watching her. She stood close to me at all times. As we made it back to the main building the feeling kept getting stronger and stronger. I couldn’t help but notice that I was more scared of the building when I was with her then when I was there by myself. Avoiding our feelings we still decided to walk inside, big mistake… As we walked in through the front door, doors started slamming behind us. We ran in frantic but we didn’t want to think much of it, we actually refuse to think it was nothing more but the wind. I told my friend that we had to go back and this time I would film the inside because I needed to get some footage at least to show our history teacher. We both walked back inside giving it one last chance however yet again the door slammed constantly behind us. We decided that this room was not going to work for us so we tried a different area of the building. Both of us repeatedly heard doors maintain slamming all around the building. it felt as like wherever we where in or around the building is where the door would slam I can’t even believe we didn’t leave when all that was going on. As we walked around the backside of the station we saw the barracks where the soldiers slept. Both of us climb through a broken window and made it back to the inside back area. It was incredibly dark so we had to use my camera and start filming to get the flash. While in the building my phone battery drained from 100% to 5% in the 30 minutes we stayed there. As we kept on walking the wind started getting stronger inside the building, we both heard howling next to our ears. It made the hair on the back of our neck stand up. I asked her if she heard what I heard and she said yes. We heard voices but couldn’t make up what they were saying, frighten enough as it is we left.